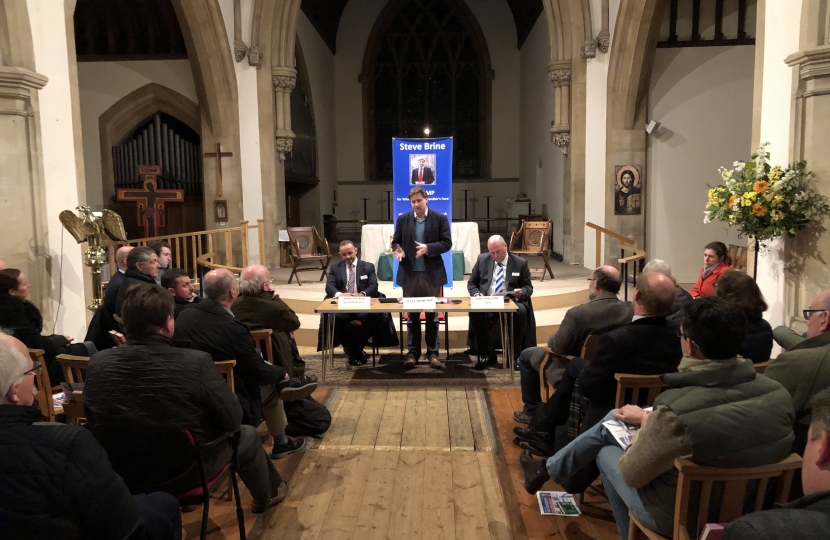 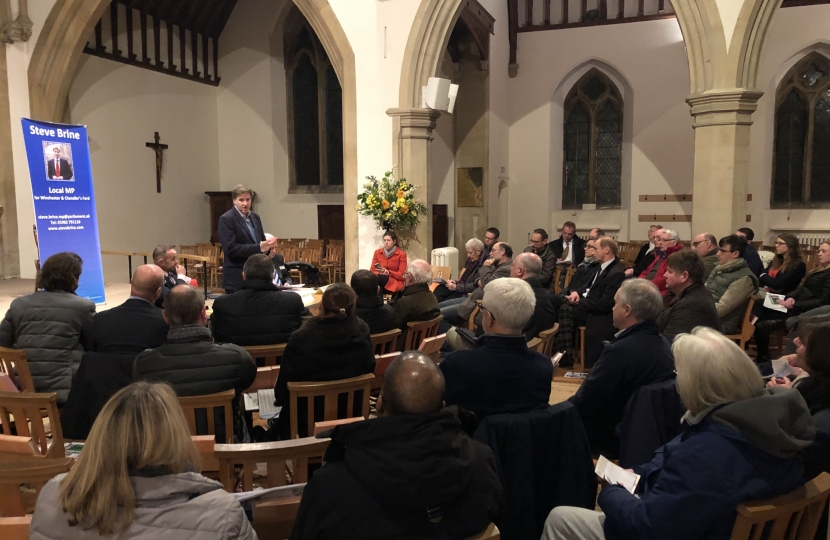 Customer service, smart ticketing, industrial disruption and operating performance were all on the agenda as Steve Brine held his ASKSWR meeting at St Paul’s Church in Fulflood, Winchester.

The Winchester & Chandler's Ford MP brought Andy Mellors, Chief Executive of South Western Railway, and Andy Thomas, who runs the local Network Rail Wessex Route, to the city to address a number of issues which has arisen over the past months since SWR took over the franchise from SWT in August 2017.

Mr Mellors acknowledged it has been a challenging 17 months, and customer satisfaction was not where they wanted it to be. He said that the railway had become busier, and more complex to manage, but they looked forward to using the £5m investment for rolling stock to deliver an increase in performance.

He also said that there had been an number of driver vacancies as they took over the franchise, and as it takes 15 months to train up new drivers, they were now starting to see the benefits. In addition, he confirmed that after the planned timetable change this May, a further 150 vehicles will come online to increase capacity.

Andy Thomas, who has recently taken on the role, told the meeting that he was fully focussed on performance, and that for Network Rail it was about going back to basics, where they start on time, finish on time and inform passengers clearly and concisely if there are any issues.

Among the questions from the floor the subject of rail fares, and the Carnet came up prominently. Mr Mellors explained the rationale behind the Carnet, which is a flexible season ticket, and how the company was obliged to follow index-regulated fares.

He also agreed they would look at the problem of closed ticket offices. A number of people raised concerns over closed ticket offices at both peak times and on weekends, where SWR advertise special deals, and there was also discussion over staff flexibility, where Mr Mellors said they were currently in conversations with the Union.

He also confirmed that SWR were not dispensing with guards, and they will continue to roster a guard on every train. Under the Holden Review, he explained that some methods of operation have the potential to be more efficient, and new trains coming online will allow guards to become even more visible to customers on board. Again, this subject was something they are talking about with the Union.

Steve Brine said: “Well done to all for the turn-out on what was a blustery, snowy evening. I am very grateful to the two Andys for coming down this evening, and while we all know the last months have been very tough, which is why I called the meeting, I am confident that they really have gripped the issues facing the rail service.

“We covered a lot of ground, including delay repay and parking around both Shawford and Micheldever station, where there needs to be real joined-up thinking to ensure that the service works for commuters as well as, crucially, local residents. There is clearly a way to go on delivering a 'part-time' season ticket product that meets expectations and I will be liaising closely with Ministers as they respond to the recent Fares Fare consultation.

“As ever, I remain more than ready to challenge SWR and Network Rail on behalf of my constituents, and encourage constituents to stay in touch with me as we hopefully move forward with confidence.”

Pictured and film; Steve Brine opening the meeting and post event wrap afterwards in the snow.