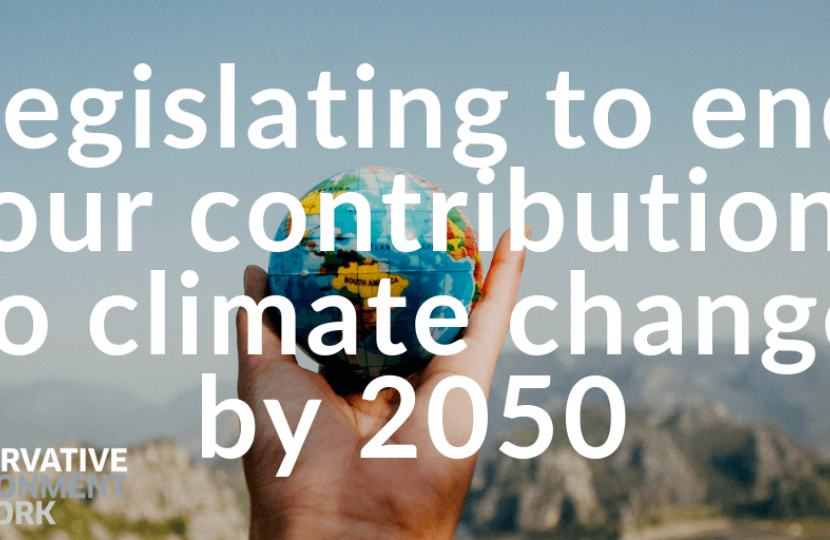 The UK was the first country to implement legally binding emission reduction targets in the Climate Change Act 2008, and this legislation makes the UK the first leading economy to implement net zero as well.

Steve is a member of the Conservative Environment Network (CEN) MP Caucus, which has consistently pushed for a net zero commitment from the Government. Commenting on the news, he said: “Today’s announcement will safeguard our natural environment, improve public health, air quality and biodiversity, and promote clean-tech jobs. Constituents, especially our young people, have called on the Government to do more to tackle climate change, and so I’m delighted about today’s news.

"Ambitious plans are needed to tackle climate change and today’s announcement has proven a commitment to exactly that. By enshrining this target into law, the Prime Minister has shown that UK can and will meet the challenges of climate change and be one of the first countries in the world to commit to play our part to limit global warming to 1.5°C.

"We should see today as a way of gaining something not giving it away. The opportunities, I called for a new Green Deal around retrofitting of existing housing recently, are huge and we need to grab them with both hands."

Implementing a net zero emissions target means that electricity, transport and heating will need to use alternative energy sources to fossil fuels to decarbonise. However, in some industries like aviation and shipping, some emissions will remain. Therefore increased tree planting and carbon capture technologies will be utilised to remove these emissions from the atmosphere - thus leading to ‘net zero’.

Sam Richards, Director of CEN said: “Steve Brine has been instrumental in our work to encourage the Government to adopt a net zero emissions target. Today’s announcement has cemented the importance of this work. If we fail to limit global warming to 1.5 °C, we risk seeing increasing flood damage here in the UK, the destruction of wildlife and their habitats, as well as severe economic consequences. But with today’s announcement, the UK is fighting back against the effects of climate change and is instead working towards delivering the low-carbon jobs and skills of the future through Great British innovation.”

UK targets will now be brought in line with the Paris Agreement by adopting the advice published by the independent Committee on Climate Change (CCC) in May. The CCC, which was set up by the government to consider its expert advice, recommends a transition to a zero-carbon economy if we are to avoid 1.5°C warming and avoid the worst effects of climate change. Read the report.