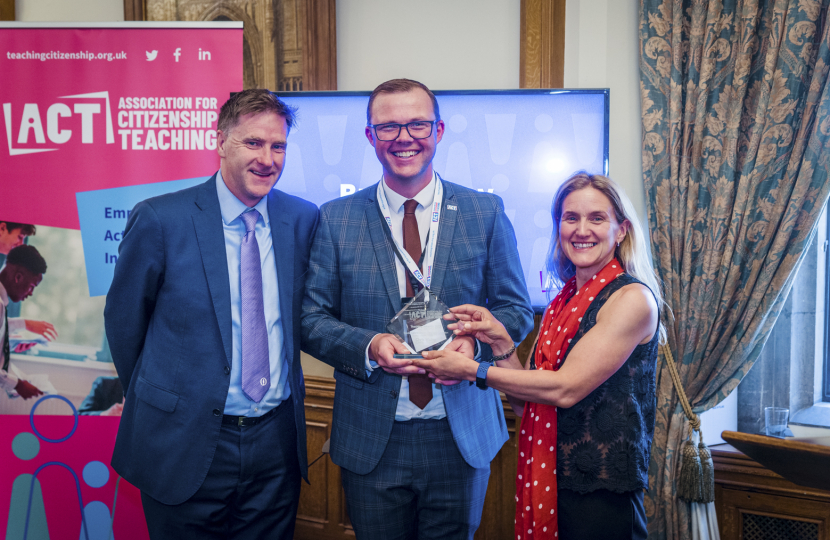 A citizenship teacher from Perins School, in Alresford, has been honoured at the Association for Citizenship Teaching awards during an event at the Houses of Parliament.

Bryden Joy was nominated alongside over one hundred outstanding Citizenship teachers, school leaders and organisations from across the UK were nominated for this year’s inaugural ACT Teaching Award.

Mr Joy, who has been teaching for fourteen years, received the award for GCSE Teacher of the Year. In 2019, he used his enthusiasm and subject expertise in media literacy to co-develop a ground-breaking CPD course and regularly shares his expertise and GCSE classroom practice with others as an ACT Ambassador Teacher.

One of his nominees said he “is a diligent, inspiring and committed teacher, who goes out of his way to support his students, not only in helping them in exam technique and marking practise questions, but also in a pastoral manner, as he supports students to get involved and engaged, bringing a genuine positivity to his classroom.”

Members of Parliament, including the MP for Alresford Steve Brine, were in attendance to congratulate their local winners and listen to the importance of citizenship teaching.

Mr Brine said; “It was a pleasure to see Bryden pick up this award and it’s an absolute recognition of the work he does at Perins School. I’ve had the pleasure to interact with him on a number of times as I’ve engaged with students at the school over the past decade.

“I was saddened to hear that he’ll be moving on to pastures new in September, the Perins community are losing a great teacher.”

Mr Joy added; “Citizenship education is vital in helping students to recognise where they fit within our wider society, and in encouraging them to stand up for their views and values.

"I am so fortunate to be able to spend time debating modern issues with my pupils and helping them to recognise others' points of view - to be given the GCSE Teacher of the Year award is an unexpected surprise!”

Pictured; Steve Brine MP with Bryden Joy as he receives his award.