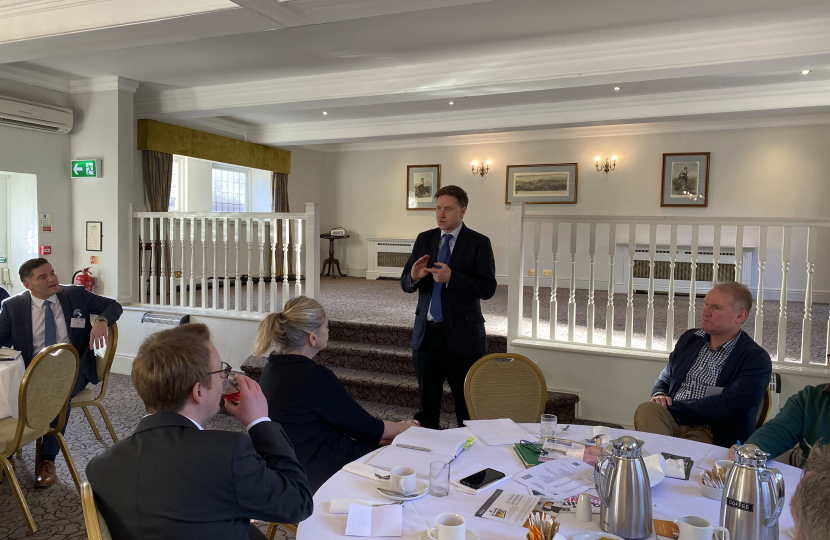 These were among a range of pressing issues raised by around 30 directors and senior managers at a breakfast briefing organised by Hampshire Chamber of Commerce.

The ‘Meet the MP’ meeting came just days after the Bank of England raised interest rates in a bid to counter inflation and firms prepare to face higher energy prices, National Insurance rises and other cost pressures.

Meaningful reform of business rates has long been a Chamber priority, with the government using last autumn’s Budget to announce more frequent property valuations from 2023 coupled with targeted reliefs.

Chambers of commerce across the country, including in Hampshire, welcomed parts of the government’s package at the time but are still calling for more fundamental change.

On VAT, representatives from the hospitality sector who attended the Winchester meeting say Ministers should consider a further extension of the reduced rates introduced to help those severely impacted by the pandemic.

A temporary reduced rate of 5% was replaced with one at 12.5% but this is set to switch back to the standard rate at the end of March 2022.

Speaking after the meeting, Mr Brine said: “This engagement event with local businesses is so valuable. As always, it was really useful to me and I hope those attending. I have a number of things on my to do list as a result which I will be raising with Ministers.”

Other issues raised at the briefing, held at the Winchester Royal Hotel, included the levelling up agenda, concerns over conflict in Ukraine and the future of the NHS.

Mr Brine added that he would be “assisting in raising Brexit issues for Marwell Zoo and following up on previous assistance for the homeless charity Trinity.”

Hampshire Chamber Chief Executive and Executive Chairman Ross McNally said: “The briefing was an ideal opportunity for our members to press the case for continued government action on business support as they try to navigate their recovery from the pandemic and regroup post-Brexit.

“We are very grateful to Steve Brine for coming along to hear our questions and concerns face to face.”