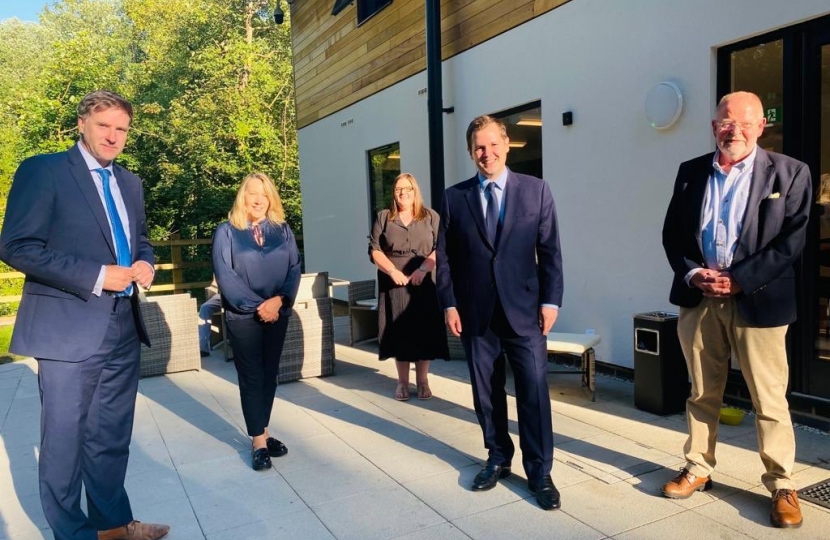 Just a few weeks back Steve Brine visited Trinity Winchester - and he promised to get a member of the Cabinet to come and see the stunning new Durngate View.

He delivered on that promise today as Communities Secretary, Robert Jenrick, dropped by to meet the team and see the facilities at the city centre charity.

The charity, which supports vulnerable and homeless people, now has residents in its £1.5m accommodation project, UnderOneRoof@trinity, and the Minister wanted to meet some of them.

The project combines the existing purpose-built day centre with new residential accommodation, to create a therapeutic community. It will provide individualised wrap-around support, based on Housing First principles to help people who have been rough sleeping for some time to turn their lives around. Trinity has said it will work closely with Winchester City Council’s Housing Teams to ensure that priority is given to people most in need.

Mr Jenrick said he was really impressed with the new facility at Trinity and pledged to work with trustees, and Steve Brine, to access new funds to help drive their ongoing work. He said; "We’re committed to ending rough-sleeping and building on the achievements of Everyone In."

Peter North from Trinity said; "We were delighted to welcome Robert Jenrick to Trinity to explain our services and show him the newly completed ‘Under one roof‘ project. We are really proud of the scheme which was completed in record time and with highly sustainable construction during the pandemic . The SoS was very interested and impressed with the project and met some of the newly established residents. The scheme will make a real difference to the lives and prospects of people who have suffered long term homelessness.”

Steve Brine added; "We're all so proud of what's happening at Trinity and the team rightly asked me to get a senior Minister here to see for themselves. It was good of Rob to drop by and we could see Straight away he was impressed by what's going on with Durngate View and the way it's going to turn lives around."

Pictured; Steve Brine and Robert Kenrick with the Trinity team during the visit.