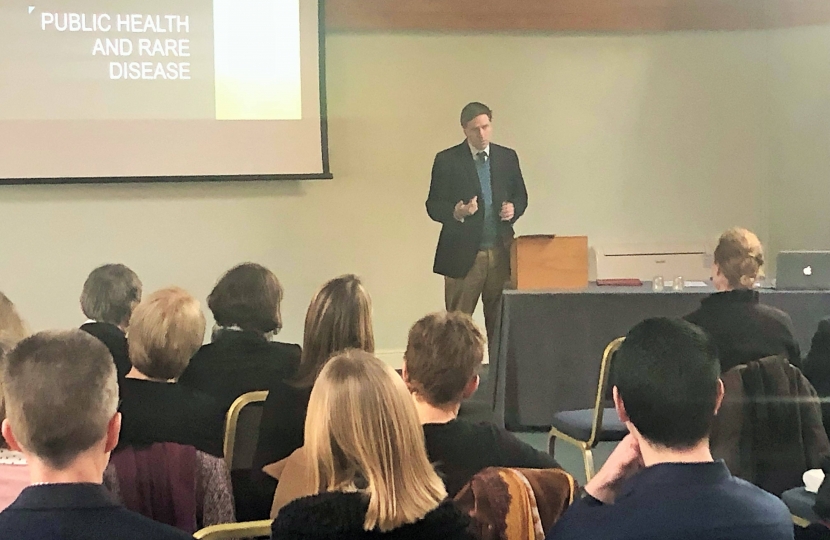 Over the course of his career, Dr Jessop, who lives in Fulflood, has made a huge contribution to the research and treatment of rare diseases, including having spent the past 16 years as medical advisor to the National Commissioning Group, which plans, funds and monitors services for patients with very rare diseases. He was recently awarded the prestigious Black Pearl Award by Eurordis, the Europe-wide association for patients with rare disease.

Steve addressed the conference not only as the local MP, but also as Public Health Minister, and paid tribute to how much invaluable support Edmund has provided to legions of registrars over the years as they worked to pass their exams.

Mr Brine focussed on the importance of prevention as a pre-emptive strike against cancer and a host of other serious diseases, and how the Government needs to work with everyone who has a role in influencing health, including employers, industry leaders, local commissioners, housing experts, educators and the voluntary sector.

Speaking afterwards, Dr Jessop said: “It was a huge privilege to hear the Minister speak with such obvious commitment and enthusiasm for public health. The past thirty years have seen tremendous achievements in the UK, with us leading the way in tobacco control; in the successful teenage pregnancy programme; in control of communicable diseases including HIV and more recently MERS and SARS; and much else besides.

“We do all of these better than any other country of similar size. We are also a beacon for other countries in our provision of services for people with rare disease. The next thirty years offer challenges but also great opportunities for us to continue as a world leader in both public health and health services.”

Edmund is married to Jane Jessop who is well known in Winchester as the founder of Blue Apple.