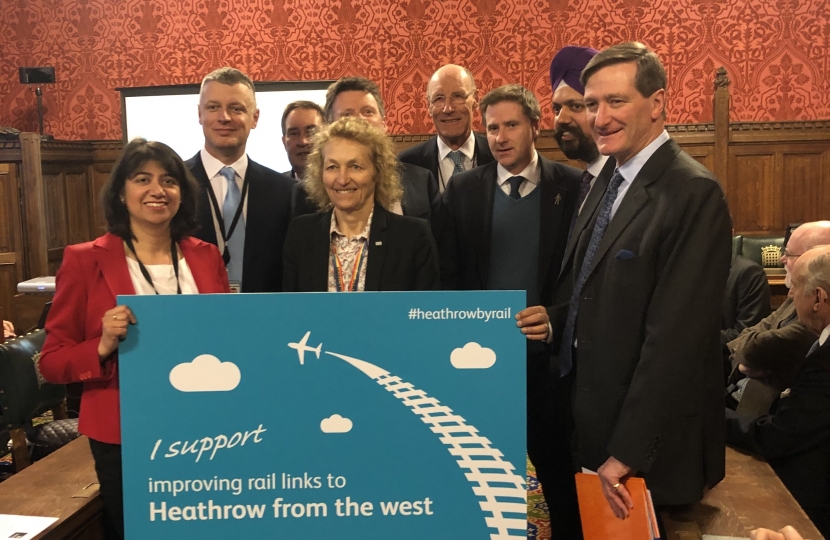 Mr Brine attended a briefing, in the House of Commons, with Network Rail and the Thames Valley Chamber of Commerce who highlighted the transformational effects from the delivery of this scheme since 20% of the UK population would be within one interchange of the busiest airport in Europe.

Sir John Armitt (former Commissioner at the Airports Commission, former Chairman of the Olympic Delivery Authority and the current Chair of the National Infrastructure Commission) spoke about the benefits, while noting that a lot more work needed to be done and this could only be achieved through partnership.

The proposal consists of 6.5km rail link between Slough and London Heathrow Airport. This connection would reduce journey times for passengers travelling to Heathrow from the South Coast, South West, Wales and West Midlands as there would be no need for them to travel through to London Paddington. This move would also reduce congestion on some of the busiest motorways and roads and cut emissions dramatically.

Steve Brine MP said; “This new rail link is so obvious it’s incredible it hasn’t happened before. It would be of great benefit to my constituents who would no longer have to choose between driving around the busy M25 or taking the train into central London.

“It was good to see such excellent, cross-party, business and community support at this very well attended meeting. This long overdue scheme’s viability was overwhelmingly supported, and it presented the opportunity for a frank discussion of the issues surrounding the scheme that need to be addressed to make it happen. We’re all united in urging Network Rail and Ministers at the DfT to get on with it.”

Sir John Armitt added; “I was pleased to attend the meeting of the APPG and discuss the potential benefits that a Western rail link to Heathrow could bring. As well as the benefits of increased public transport links to the country’s biggest and busiest airport, it would also reduce air pollution, and pressure on services from London. I therefore remain supportive of this scheme, which has both been supported through my work at the Airports Commission, and by Government.”

A public consultation was held last year and all responses are now being analysed by Network Rail who have said they will publish finalised plans and hold public information events in early 2019.

Pictured; Steve Brine with cross-party MPs at the meeting in the House of Commons.

The following were also present and made valuable contributions: