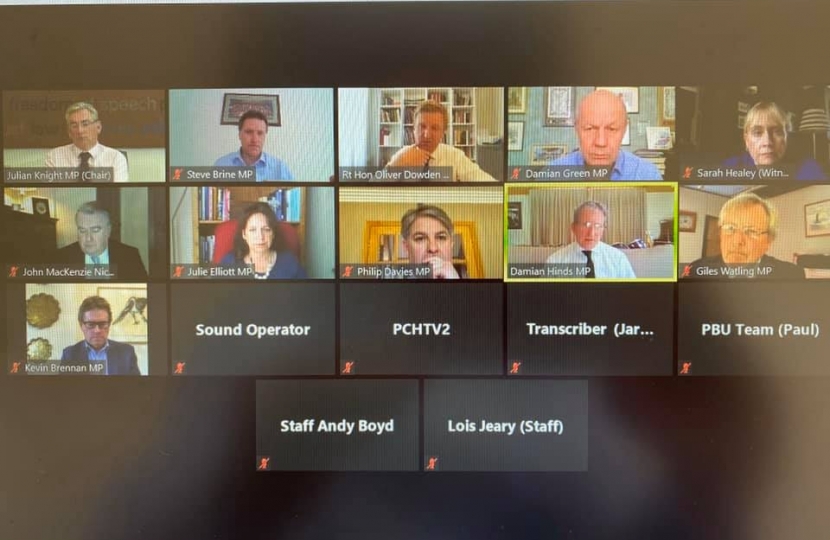 Members, who were all participating via zoom, covered subjects including the help and support available to charities as a result of Covid19, the future of Public Service broadcasting, misinformation and social media as well as the future of the BBC licence fee and mass sporting fixtures after the current public health crisis.

Steve Brine focused on two areas in his questioning; the plight of self-employed workers in the creative industries and the need for urgency in getting help to charities. He cited Winchester Citizens Advice Bureau who had contacted the MP before the session.

He says; "I have been working really hard on the workers missing out on help via the self-employed support scheme and that includes many people working in the creative industries. I wanted to get some sense of hope from the Secretary of State that they haven't been forgotten and to lay on the line the challenges outlined to me by many constituents and various lobbying organisations.

"We got that, in so much as he said the Treasury do not see this matter as closed, but was able to present the problem as I see it.

"Furthermore, it was great to bring the point made to me by the CAB in Winchester around the urgency of getting help to charities. They contacted me on Monday and had their issue raised with a member of the Cabinet on live TV by Wednesday!"

Watch / pictured; Steve Brine questions the Secretary of State on help for the self-employed and on-screen as part of the zoom call.