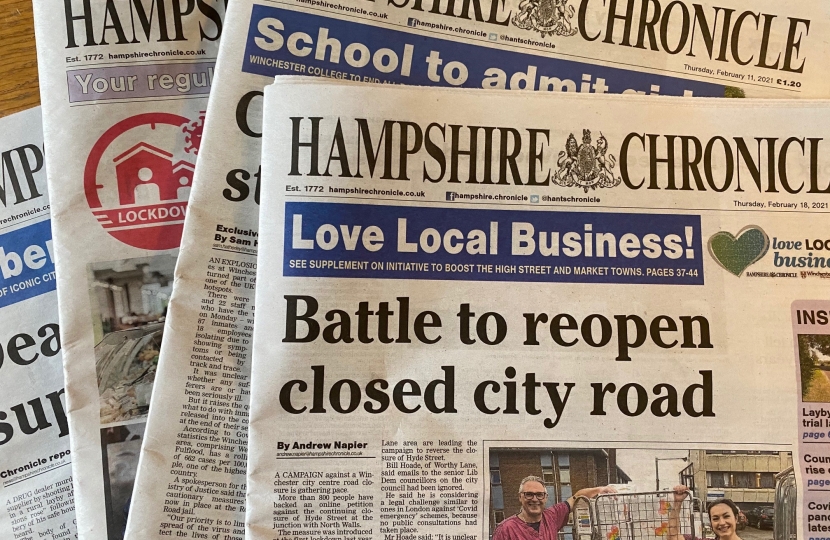 We now have the Government’s “roadmap” for lifting national restrictions in England.

I don’t know about you but I still struggle to believe headlines such as ‘Coffee on a park bench allowed from March’ are for real but they’re a reminder we’re a long way from the best of times.

As I said in Parliament on Monday, I was more content with this week’s statement by the Prime Minister than I feared I might be. That is primarily because the full return of schools has been confirmed for 8 March.

Classrooms are the very best places for our young people to be and, while I think primary at least should have returned this week, we have a compromise and the return of all pupils which will be a hallelujah moment for many. The Government have done the right thing and I shall say so when I lead a debate on the subject alongside my colleague Robert Halfon MP today.

Furthermore, the PM made some very sensible assertions this week which needed to be said.

He accepted that no vaccine can ever be 100 per cent effective, that there will always be people who don’t take a vaccine, that any lifting of lockdown will result in more cases and, most crucially of all, “there is no credible route to a zero Covid Britain or indeed a zero Covid world”.

These statements probably don’t seem too radical but, until now, Government Ministers have struggled to say the words and they’re crucial.

They are right to be cautious and we must not rush this. Not only would that reveal an unreasonable appetite for risk, it is not where public (or should I say published) opinion resides.

No-one, least of all a former Public Health Minister, is saying otherwise but it is my job to speak up for those who aren’t comfortable enough not to worry because they run a business that remains closed (hospitality in any meaningful sense for at least another three months) or perhaps sit as one of the self-employed still left out of the otherwise generous Government support.

We hear people say this “must be the last lockdown” and “we don’t want to go back” and of course that’s right but why would we?

In its’ own analysis of covid deaths, the Government confirms that 99% of deaths are in vaccine cohorts 1 to 9. Equally, we’ve heard this week about the amazing efficacy of the vaccines - which easily outperform the flu jab - and we’ve heard great news about the impact on transmissibility.

So with 99% of the vulnerable protected by the end of April, I will need convincing why legal limits on social contact will be in place until at least 21 June. The onus remains on the Government to justify their restrictions - those in law anyway - beyond the end of April.

Finally, I agree with the Chief Scientific Adviser, when he said that Covid will be with us for ever. The truth, therefore, is that so will infections and hospitalisations and, as with seasonal flu every year, it will take people before their time. It may one-day take me.

We have to accept that the human condition includes our own mortality and that is really hard.

So let us be driven by the data. Let us be cautious and, yes, let us produce a release from lockdown that is irreversible.

But let us produce one that is irreversible because we are being honest with the British public, not because we are chasing a world without covid, which, as the Prime Minister finally said, can never be.