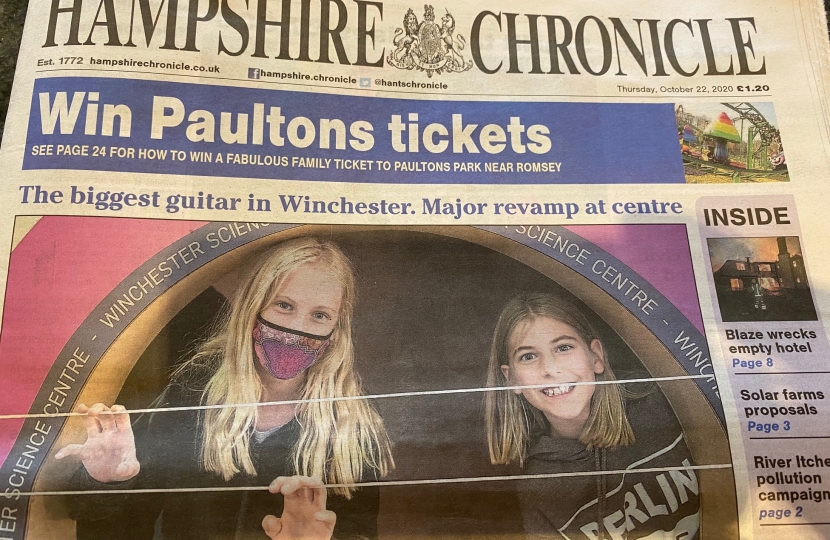 The NHS, both locally and nationally, remains my priority.  I’ve written about that once or twice before in the Hampshire Chronicle and of course in my own publications.

Over the past decade as our MP I have tried to really understand the local NHS and support what is in our best interests in line with clinical advice; always remembering politicians do not design health services.

Maintaining those services in a busy District General Hospital (or DGH for short), with the all the interdependencies across social, community and primary care, is an extremely complex business and we’re fortunate in Alex Whitfield to have a Chief Executive on top of her game.

We can’t agree on everything but we’re both confident enough individuals to see criticism and challenge as, not rude, but part of the job and something that stress tests policy on a really important subject.

As the old Winchester & Eastleigh Trust came together with Basingstoke, compromises were required – around the centralisation of services – when it came to urgent stroke care and more recently acute orthopaedics.

This Summer it got serious as Hampshire Hospitals embarked on the Hampshire Together programme and I have worked incredibly hard, including writing to thousands of households at one point, to get constituents involved in one or more of the virtual engagement sessions.

Even so, it is a process which has, for some, passed by unnoticed and that is hardly surprising in the midst of a pandemic. It’s why I have said publicly, privately and in the House of Commons this is a strange time to seek major changes to the local NHS if your aim is to do so with wide-scale engagement and consent from the general public.

Nonetheless, Hampshire Together has produced a series of options upon which it plans to formally consult early next year and we should be clear that will pose some very difficult questions for Winchester.

There’s no question the Trust faces significant further pressure to centralise some services. Some of that external, around neonatal care for-instance, some of it not.

I have consistently said this project, because it is part of the “40 new hospitals”, is primarily about replacing Basingstoke Hospital and the Prime Minister confirmed that earlier this month.

But we’re clear, as I promised last December, it will see “significant investment” at the RHCH and I plead guilty to the charge I helped make that happen. And I remain of the view Winchester needs a District General Hospital with an emergency department and consultant-led maternity services.

I know that’s extremely challenging and the Trust, as Ministers who I speak to a great deal about this, want a clinical model that does best by us all but I would urge them to keep an open mind and not to give up on Winchester Hospital because we have not.

As I have said for a decade and more, I’ve never met a constituent who doesn’t want to be taken to the right place, to get the right treatment, when they’re acutely unwell and that requires services that give us the best chance should illness strike.

But we should bear in mind, any DGH is a delicate eco-system and the services it has are highly dependent on each other. Some change is manageable but, if the Trust plan much more, they should be honest with residents around what we gain and what will be taken away. It is up to the clinicians now to make their case.

You can get regular updates on my Facebook page www.fb.com/SteveBrineMP and see more than a decade of work at www.stevebrine.com/prioritynhs