Hampshire Chronicle column - get us back to school 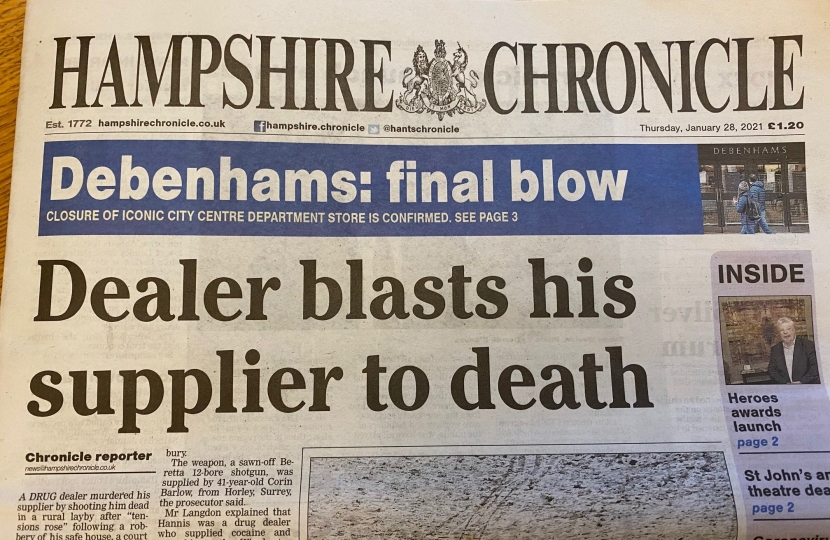 This week has been an extremely busy one as I’ve been working with colleagues across Parliament to push the urgent case for our schools to (fully) re-open.

My central thesis is that we’re seeing a tipping point right now among parents who see the superfast vaccine roll-out at the same time as they see their own children schooled in front of a computer day after day with little hope that is going to end before, now we hear, Easter.

The argument I am setting out is that once we’ve vaccinated the top four most vulnerable groups - and given it a few weeks for that to take effect - you’ve reduced the risk of mortality from Covid by almost 90% (and the risk of hospitalisation by more than 50%) so you need to start bringing our economy and our society back to life.

And the first piece of that jigsaw is our schools which the Government rightly says is its’ priority.

What I am asking for is Ministers to set out a plan to bring some clarity to the situation and I know teachers, parents, children and school leaders would like that as well.

So yes we’ve set a date at the start of March – which is regrettably not right after half-term as it should have been – that’s tied to the first four groups being vaccinated. That is not an arbitrary timetable because surely it should be linked to key milestones around the roll-out of the vaccine.

We’re asking for a plan based on the Government’s own milestones so, as I said in the House of Commons earlier this month, we can give people some hope.

And I am not glibly saying teachers should get back to the classroom regardless of risk; I have already expressed in Parliament my belief that teachers, early years workers and school staff should be vaccinated at the start of the next phase of the programme. That is not an easy argument to make but if schools really are our priority, we need to put our jabs where it counts once we’ve protected the most vulnerable groups.

Anne Longfield, England’s excellent Children’s Commissioner, has spoken about the way many vulnerable children ‘slip out of sight’ during lockdown and she’s right of course but all our children are suffering at this time. Just because you can provide a big kitchen table and a modern laptop doesn’t mean your children’s mental health, and educational prospects, are not being negatively affected.

Our Prime Minister said last year that keeping schools closed a moment longer than is absolutely necessary was socially intolerable, economically unsustainable and morally indefensible. I could not put it better myself.

Turning to that superfast vaccine roll-out and it was quite moving to spend a morning at our Badger Farm centre last week as a volunteer. It was a chance to see first-hand how it’s going and feedback to Ministers from the front-line.

Paramount among them was, of course, supply which we keep hearing is the ‘rate limiting’ factor to doing even more vaccinations. I am liaising with Ministers every day to understand this and push for clarity around future supply lines because we’re set up here to jab4victory and it’s heart-breaking to see it, not yet, fulfilling its potential.

We need to get to five million a week and I am badgering colleagues in Government every single day to focus on that ambition so the cavalry long since over the hill can start to truly win the covid war.

Stay updated on my work, locally and in Parliament at www.fb.com/SteveBrineMP