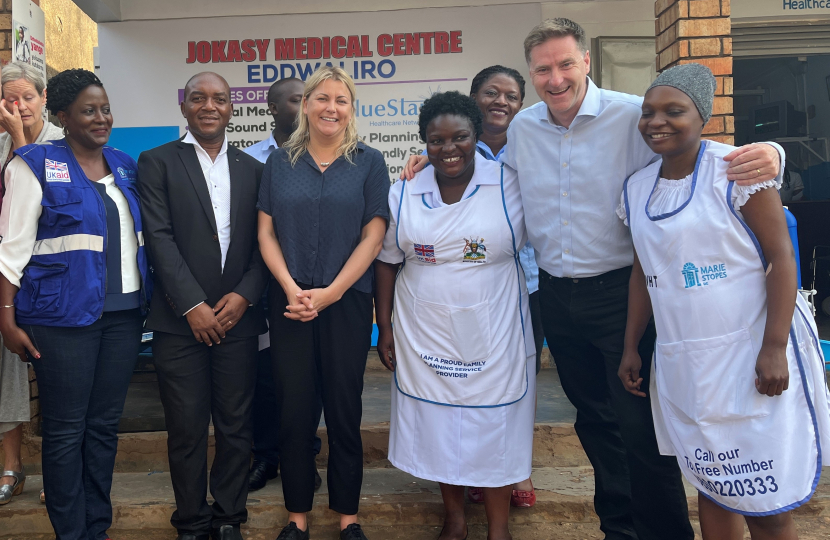 Earlier this month I was very fortunate to travel to Africa as part of my ongoing work on global health.

My first time on the continent took me to Uganda on a study tour with the all-party group on population, development and reproductive health.

Uganda is a country where the population is ballooning and maternal mortality is among the highest in the world - some 336 per 100,000 new mum’s - and 17% of those deaths are among girls aged 15-19 years old.

To give you some context, maternal mortality here in the UK is 11 per 100,000 live-births.

Our cross-party group travelled to Kampala and Gulu and the rural north in Luwero and Kabelega in a programme put together by Marie Stopes International and the United Nations Population Fund.

The figures I have given above are truly sobering but our visit to Kawempe maternity hospital, in the sprawling heat of the capital, took us to another place altogether.

Kawempe hosts 2000 births every month and carries out some 30 caesarean sections every 24-hours. Perhaps no surprise when, according to the Uganda Bureau of Statistics, almost a quarter of Ugandan women has given birth by the age of 18. They are often much younger of course which makes natural birth even more of a risk.

The staff there, many who told me they never take a holiday, could not have been more welcoming to our group and just get on with it but I think we all found the special care baby unit – where very early and very poorly newborns are cared for – extremely difficult to see.

As we left the Matron said to me, “I know it looks like bedlam here Sir but God is at work in Kawempe.” It was a beautiful moment and I’m sure something got in my eye as we climbed on the bus.

As a constituency MP, and a former UK Health Minister, I obviously take a very close interest in all matters NHS and it’s true we have many challenges here at home but it’s never a bad thing to look outside ourselves to gain perspective.

I previously held part of the Overseas Development Aid (ODA) budget in my ministerial portfolio so it was really good to see some of the projects UK Aid funds in Uganda.

What we’re talking about here is family planning clinics in and among the communities they seek to help where advice and education (and every contraception method known) are in plentiful supply.

Yes, Uganda has one of the highest birth rates in Africa but UK taxpayers are helping women increasingly make informed reproductive choices and we should be incredibly proud of that.

As well as seeing the UK High Commissioner we also visited the Ugandan Parliament and met with senior MPs to share experiences and ideas.

I made many contacts and, for-instance, am liaising now I’m back in Westminster on various policy areas including the vaccination of teenage boys against HPV which I commissioned in 2018.

Cervical cancer is the biggest killer of women in the country so perhaps our success in this area can help.

Uganda remains part of the Commonwealth but it’s a sovereign state and while we may struggle with some things (such as the near illegality of abortion) we come alongside them and we help.

For those interested further, I will post our full report at stevebrine.com when it is published later this month.