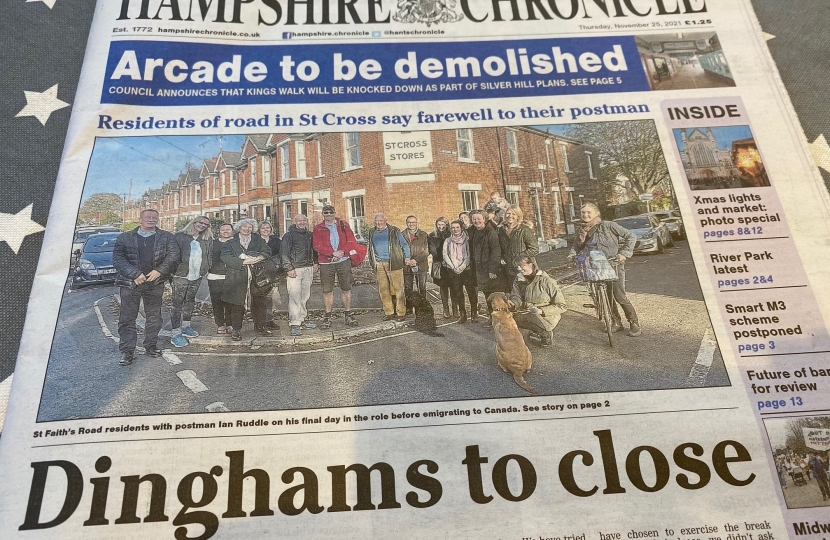 What do we want Winchester to become over the next ten, twenty, years?

It’s a question I hear a lot as I go about my work and it’s not a new one. Like many readers, I remember attending the ‘Vision for Winchester’ event at the Theatre Royal in March 2007. I am not new to Winchester.

Erstwhile reports were drawn up after that meeting and there have been many since. And that’s before we even get to ‘Silver Hill’ and the saga which spans more than twenty years. As reported elsewhere, we now have another blueprint for what is affectionately called “city centre regen”.

That will, righty, be carefully considered and I am grateful to WCC’s senior leadership team for briefing me. I suspect the single developer, if that’s what transpires, will be an issue for some - as it was the last time such a move was proposed - and I wouldn’t be surprised to see the lawyers do well once again.

But we shall see; and I would encourage constituents to engage with central Winchester because what takes place there will shape the future of our city for years to come.

For me however, and this harks back to series of columns I wrote last year, the question is how does it all fit together to shape the Winchester we want and need? How will we attract investment into the city to pay for the public services we demand, create good quality jobs for young people who’ve grown up here, foster an attractive retail offering, meet our net zero promises and create communities that are at ease with themselves?

City centre regeneration is, on its’ own, a massive project. Yet on top of that we have station approach, North Walls Rec, the availability of commercial business space and of course the small matter of a possible £100m investment on the greater River Park site by Southampton University.

My first thought when I heard about this was for the impact on our own University of Winchester and, given the vision is for it to have a “creative industries” focus, how it might affect existing city venues such as Theatre Royal. Neither were aware of the announcement until it was more or less in the public domain.

Perhaps this will be good for Winchester’s creative sector but I’d like to see this, and the future of Kings Walk where long-standing independent traders are being given their marching order on Christmas Eve to make way for a new ‘arts and creative’ hub, as part of a District wide vision for arts and culture.

I have conversations ongoing with many organisations, including their Vice Chancellor, about the Southampton University project and it’s right to point out there are years to run before firm plans are outlined. All the more reason therefore, to ask how this could change Winchester.

We need local leaders to consider the impact a much larger university presence could have on existing communities and, for-example, the availability of family houses for our children to one day live in. We do have to consider the impact of thousands of more students in the city and how that fits with the vision.

Like Parliament and its MPs, local councils are full of people who want to do what’s right and care about the people and area they represent. The trick is to look up from time to time and make sure the pieces fit together. This city has a lot going on right now but I feel passionately someone needs to decide how it all answers the vision for Winchester question and, crucially, whether residents agree with the answer.

A vision for Winchester?

There is growing unease as piecemeal change excludes residents and threatens local institutions. What do you think?