Junction 9 on the agenda as MP meets National Park 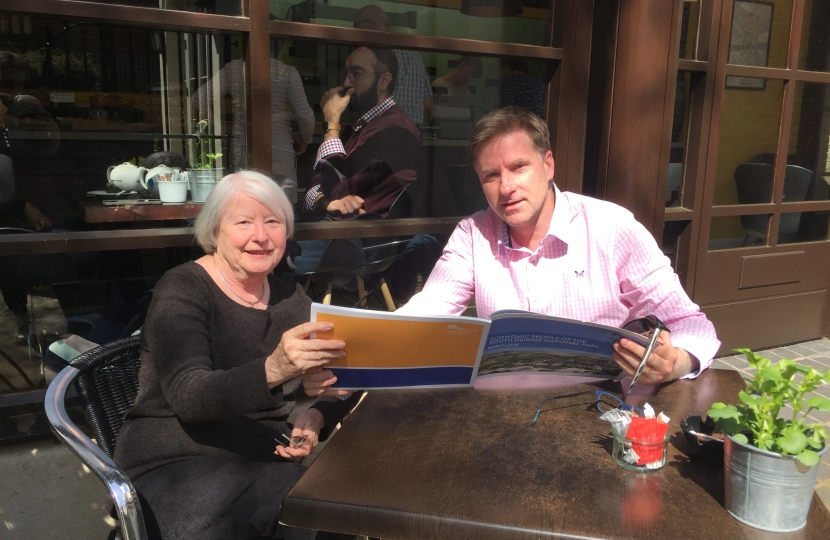 The proposed major works at Junction 9 of the M3/A34 were top of the agenda for local MP Steve Brine as he met up with the Chair of the South Downs National Park, Margaret Paren on 4th May 2018.

The Winchester & Chandler's Ford MP has been working for many years on affecting real change at the junction, which serves as a major route from southern ports up to the Midlands and the North and has increasing become a major bottleneck affecting local traffic as well as the wider transport infrastructure.

Steve has welcomed the proposed works, set to begin in the summer of 2021, but led local calls for changes to be made around the A34/A33 crossover for motorists travelling from Easton Lane towards King's Worthy. Fears about the safety of this manoeuvre were consistently raised by residents and local organisations during the recent consultation, including from Winchester City Council.

The South Downs National Park have objected to the scheme, and expressed their concern with the "lack of information regarding mitigation measures, or where these are impractical, compensation for any adverse impacts on the National Park and its special qualities."

Following the meeting, Steve Brine said; "I pressed Margaret to work with me, Highways England and HCC to find a way to support the scheme because it has strategic importance to the area, the region and the nation.

"I am confident we will get their support but fully understand they have a responsibility to ensure major work such as this doesn't detrimentally impact the National Park without acceptable measures put in place. We will get there in the end."

The pair also discussed the new Economic Profile of the South Downs National Park which is helping to shape future activity within the vast area which stretches from Winchester to Eastbourne. Mr Brine heard how issues around superfast broadband continue to blight rural businesses.

The MP added; "I also took the opportunity at this meeting to raise some of the issues, in particular around development and planning, as raised with me by landowners during my recent session with local NFU members and the Farming Minister in Winchester.

Pictured; Steve Brine MP and Margaret Paren during their meeting in Central Winchester.