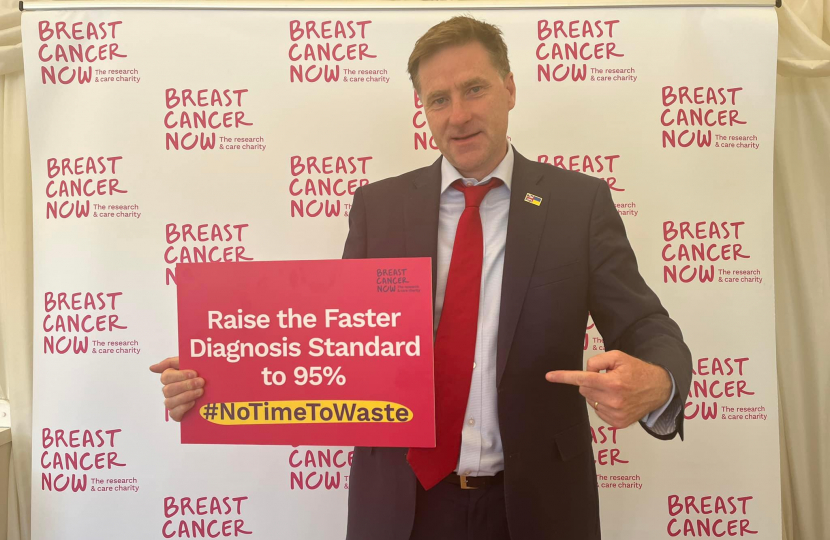 Delivering faster diagnosis for breast cancer is vital. For the tens of thousands of patients diagnosed with breast cancer every year, it means their treatment can begin as soon as possible, and for the majority of the almost 700,000 people referred to by their GP to a specialist a year, who won’t have breast cancer, it means they can have their minds put at rest quicker.

Despite the incredible hard work of the NHS, disruption caused by the pandemic continues to impact the number of people being seen by a specialist within 2 weeks of GP referral (the ‘two-week wait), resulting in a rise in  breast cancer patients waiting more than 62 days to start treatment.

In (constituency), (2 week-wait %) of people with suspected breast cancer were seen by a specialist within two weeks at the start of 2022 (January to March), compared to 54% across England and the operational standard of 93%.

The Government is proposing to replace the 93% two-week wait standard with a Faster Diagnosis Standard (FDS), which has a target that 75% of people referred should be diagnosed with cancer or have it ruled out within 28 days. However the reality is, with the vast majority of referrals not resulting in a breast cancer diagnosis, not a single breast cancer diagnosis needs to be confirmed within 28 days for the FDS target to be met. This target is also 20% lower than that recommended by the Independent Cancer Taskforce in 2015.

Breast Cancer Now is calling on the government to set out a clear timetable for raising the FDS to a more ambitious 95% level, as originally proposed in 2015, before the two-week wait is removed from legislation. It’s also crucial that the government sets out how it will address the breast screening shortfall and identify the over 8,000 women living with undiagnosed breast cancer because of COVID.

Steve Brine MP said; “The fact that data published so far on the Faster Diagnosis Standard (FDS) shows that the 75% target continued to be met and exceeded in breast cancer, despite the drop in the number of people being seen within two weeks, reinforces Breast Cancer Now’s concerns about its inadequacy. This is not the gold standard my constituents should expect or deserve.

“I am backing Breast Cancer Now’s campaign calling on the Government to be ambitious with breast cancer and set out a clear timetable for raising the FDS target to 95%, and outline how cancer services will be supported to meet this.”

Mia Rosenblatt, Associate Director, Policy, Evidence and Influencing at Breast Cancer Now said; “We fear that for breast cancer, this new target could fail in its aim to ensure those referred are diagnosed sooner, especially as most people seen within two weeks of a breast cancer referral are already likely to be diagnosed or reassured well ahead of the 28-day deadline.

“The upcoming 10-year Cancer Strategy presents a crucial opportunity for the government to commit to increasing the target for the Faster Diagnosis Standard, set out a fully-funded plan to get breast cancer performance back on track, and build and support the diagnostic and imaging workforce needed to realise its ambitions on rapid diagnosis. We must be ambitious for breast cancer”.

Anyone seeking information and support can speak to Breast Cancer Now’s expert nurses by calling their free Helpline on 0808 800 6000.