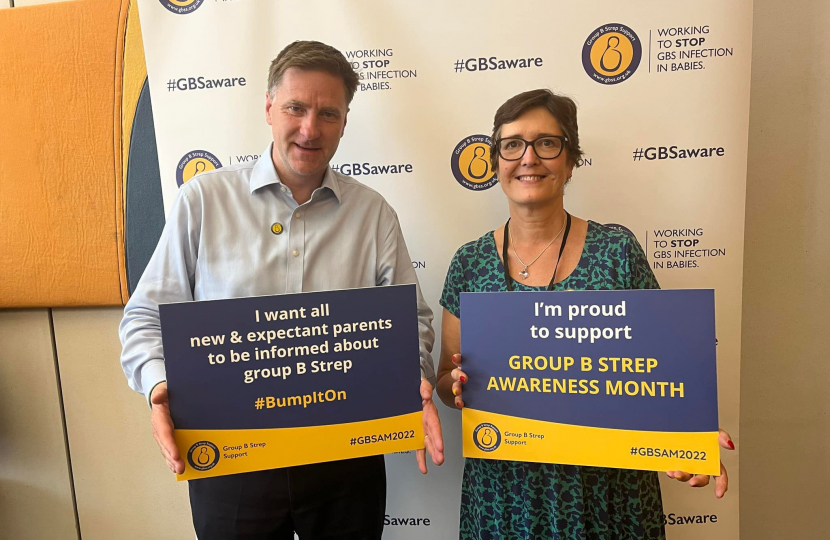 Steve Brine MP has called for greater awareness of the leading cause of severe infection in babies, after meeting with charity Group B Strep Support.

There is an ongoing clinical trial, GBS3, exploring whether testing pregnant women for group B Strep will prevent infection more effectively than the UK’s current risk-based approach.

Costing £4.2m and funded by the National Institute for Health Research (NIHR, the research arm of the NHS), the trial will involve 320,000 pregnant women and is being run by the University of Nottingham's School of Medicine in 80 sites in England, Scotland and Wales. However, the trial needs 80 sites to be enrolled by October 2022, and currently has just 33 signed up.

Steve Brine said: “I’m pleased to be raising awareness of group B Strep and the NIHR-funded GBS3 trial. The UK’s rate of these infections is far higher than it should be, and we need the results of the GBS3 trial to move things forward and level up care for mums and babies.”

During Group B Strep Awareness Month, the charity is encouraging people to raise awareness of group B Strep among pregnant women, as part of their #BumpItOn campaign.

Jane Plumb MBE, Chief Executive and founder of charity Group B Strep Support, said: “This is a now or never moment. Without having robust evidence, policy won't change and the GBS3 trial is absolutely the best and probably only shot at being able to get the evidence to affect change. I’m calling on hospitals to sign up to the GBS3 trial, so we can end these devastating and preventable infections in babies.”

Find out more about group B Strep at gbss.org.uk