MP commits to a smokefree future 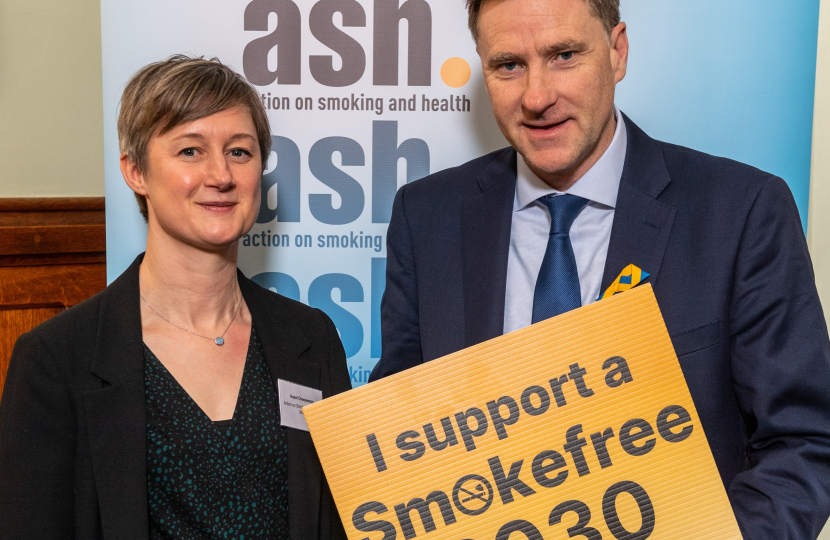 Steve Brine joined colleagues from across Parliament at a parliamentary event to celebrate No Smoking Day, as the Public Health Minister heard leading figures from across health and local government affirm their commitment to securing the Government’s goal of a smokefree country by 2030.

The Public Health Minister was speaking together with Local Government Leaders and senior figures from the NHS at an event in Parliament hosted by the All Party Parliamentary Group on Smoking and Health to mark No Smoking Day.

Public Health Minister, Maggie Throup MP, said;“Giving up smoking is one of the most important steps to leading a longer and healthier life, and we’re determined to achieve our ambition to be smoke free by 2030.

We have launched an independent review to look at ways to hit this target to level up the health of the nation and tackle inequalities. It was brilliant to speak alongside colleagues in the NHS and local government on ways we can help people stub out smoking for good.”

Bob Blackman MP, Chairman of the All Party Parliamentary Group (APPG) on Smoking and Health said; “As chairman of the APPG on Smoking and Health I was delighted the NHS, local government and Parliamentarians together on No Smoking Day to pledge their support to the Public Health Minister for the Government’s smokefree 2030 ambition. Now it’s time for the Government to deliver a Tobacco Control Plan containing the bold actions it knows are needed if this ambition, so vital to levelling up and increasing healthy life expectancy, is to be delivered. My parents lost their lives to this lethal addiction, so this is personal, I don’t want others suffering the way I did.”

The Member of Parliament for Winchester and Chandler's Ford and former Public Health Minister, Steve Brine, said; "I worked closely with ASH when I was at the Department of Health and they have a fine pedigree of informing Government and helping us transition towards smoke free. We’ve done a lot in 50 years but, as ASK are well aware, we have a lot more to do starting with a new ambitious and deliverable SmokeFree England plan this Spring."

The event also saw the relaunch of the Local Government Declaration on Tobacco Control and the NHS Smokefree Pledge [2] revised to reflect the Government’s commitment to make England smokefree by 2030. These are commitments which local organisations can make to show their support for action to reduce smoking.

The Pledge has been endorsed by leading national figures including the Chief Executive of NHS England, Amanda Pritchard, and the Local Government Declaration by the Chief Medical Officer, Professor Chris Whitty. The previous versions have been widely signed up to by over 197 local councils and NHS organisations.

Professor Yvonne Doyle, speaking at the parliamentary event on behalf of NHS England as the Medical Director for Public Health said; “NHS England recognises that smoking is a leading cause of health disparities responsible for half the difference in life expectancy between the most and least deprived groups in society. The NHS has a key role to play in ending these disparities. Working alongside our colleagues in local government we will strive to make smoking history in the next decade and help deliver the Government’s smokefree 2030 ambition.”