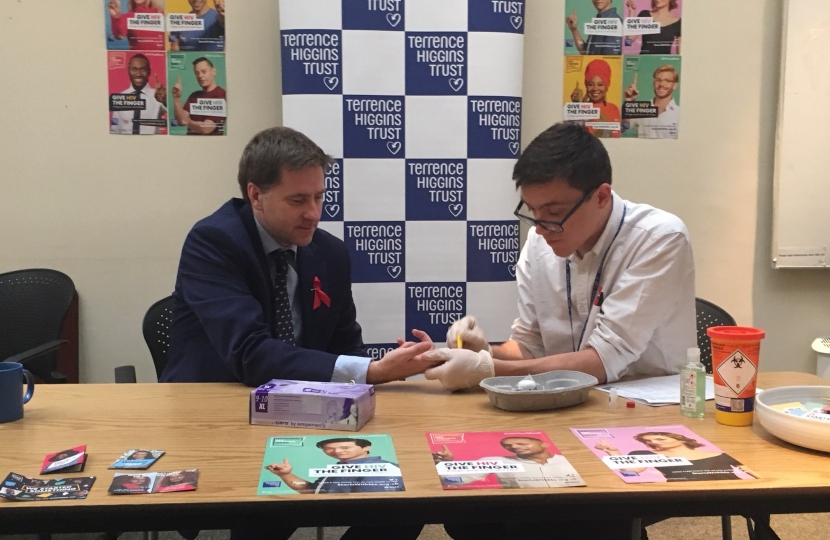 A new independent commission which aims end HIV transmissions in England within the next 10 years has been launched today (22nd July 2019) and Winchester MP Steve Brine will be among its members.

The HIV Commission has been created by the UK’s leading HIV charities, Terrence Higgins Trust and the National AIDS Trust. It will be chaired by Dame Inga Beale, the former CEO of Lloyd’s of London.

The year-long independent commission is backed by the UK Government and will host a series of community events, a public online consultation, and a national call for evidence from those directly impacted by HIV. The Commission will publish its recommendations next spring, which the Government has committed to review as part of its commitment to publish an action plan to meet its target to end new HIV transmissions by 2030.

Ministers at the Department of Health and Social Care, which until March included Mr Brine, set the goal earlier this year for England to become one of the first countries in the world to reach the UN zero-infections target. The Government will convene an expert group to develop an action plan to end new HIV transmissions after it receives the HIV Commission’s recommendations.

Steve Brine says “Increased and frequent HIV testing, swift treatment for those diagnosed with HIV, continued high rates of condom use, and HIV prevention pill PrEP have contributed to a 28% drop in new HIV diagnoses in the UK between 2015 – 2017.

“This creates an opportunity in which the end to new HIV transmissions is possible and I was always focused on that that during my time in Government. Action is needed to ensure progress is made in all affected communities, and to tackle the significant discrimination and stigma faced by people living with HIV when accessing health care, in the workplace, and even their own families. I am really thrilled to be joining the HIV Commission and would welcome views from constituents in Winchester & Chandler’s Ford as part of our work.”

Dame Inga Beale, Chair of the HIV Commission, said: “We have a unique opportunity to end new HIV transmission in England. We will develop evidence-based recommendations to make this happen within a decade.

“The preventative tools we have are working to reduce HIV transmission in many parts of the country. The commission will look at what we need to do to build on this progress to stop HIV in its tracks for everyone. This is a big challenge, but it’s one we can achieve if we harness the resources and capability that has made the UK a pioneer in HIV prevention, treatment and support for nearly 40 years.”

Ian Green, Chief Executive at Terrence Higgins Trust, added; “In the 1980s and early 1990s an HIV diagnosis was a death sentence, but now we’re aiming to end new HIV transmissions in England over the next 10 years. That’s incredible progress by anyone’s standards but we need a clear plan for achieving this ambitious target if we’re to make it a reality. That’s why we’ve worked hard to assemble an exceptional group of people to map out the journey we need to take.”

Commissioners work in a voluntary capacity and Steve Brine will be doing this alongside his role as a backbench Member of Parliament.