MP Pledges to support those affected by ovarian cancer 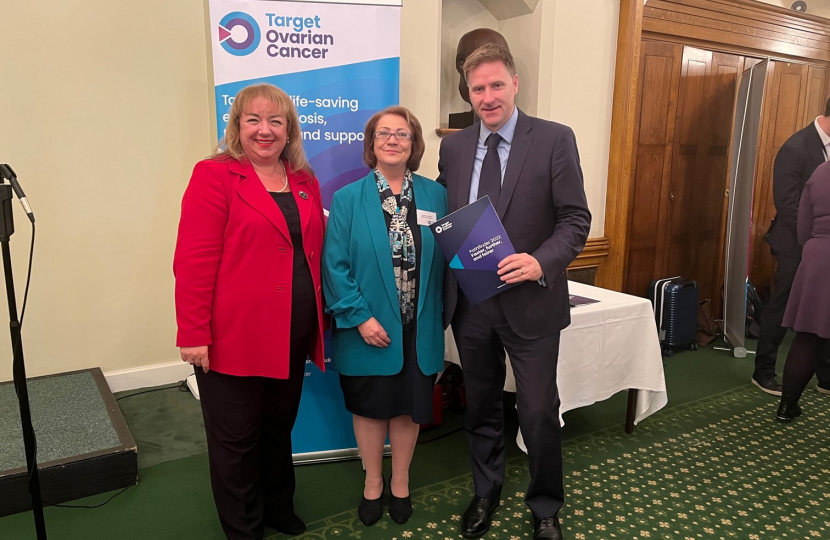 Steve Brine MP has shown his support for everyone affected by ovarian cancer across Winchester and Chandler’s Ford at the launch of Target Ovarian Cancer’s Pathfinder: Faster, further, and fairer report in the House of Commons on Monday 14 November.

The latest state-of-the-nation report revealed women are still being overlooked as the deadliest gynaecological cancer continues to devastate and claim lives. MPs, healthcare professionals and those affected by ovarian cancer came together in parliament to hear that progress is possible if urgent action is taken now.

The report reveals that if diagnosis was faster, further support was available and access to treatment was fairer, there could be potential for more women to survive, live well with ovarian cancer and be supported from diagnosis and throughout treatment.

Steve Brine MP, who also spoke at the event in his capacity as Chair of the Health and Social Care Select Committee, said after the event: “Over 4,000 women in the UK die of ovarian cancer each year, and awareness of the key symptoms remains too low. We must come together and act now to make sure everyone knows what look out for, and that those affected by ovarian cancer face better outcomes. I am delighted to stand with Target Ovarian Cancer and pledge to support faster diagnosis, fairer access to treatment and further, wider support for everyone diagnosed with ovarian cancer.”

Target Ovarian Cancer is calling for a combination of national symptoms awareness campaigns and more training and support for GPs, which will lead to earlier diagnosis of ovarian cancer, access for all to treatment, widespread improvements in support, notably mental health support, as well as an urgent investment in the Clinical Nurse Specialist workforce.

Annwen Jones OBE, Chief Executive of Target Ovarian Cancer, said: “While there has been some improvement in recent years, our report clearly shows that we now need action taken to secure progress which is faster, further and fairer. We are hopeful that with the right targeted investment and backing from the government we can achieve this together, prolonging and saving lives.

“Since our last Pathfinder report in 2016, we have worked tirelessly to transform the lives of those living with ovarian cancer, despite the setbacks of the pandemic. We have achieved the first government-funded national symptoms awareness campaign and the first national ovarian cancer audit, and we have seen the introduction of ground-breaking new treatments like PARP inhibitors and wider genomic testing. Progress is possible, but Pathfinder demonstrates that these improvements are not enough. Ovarian cancer is not going away. We can change the course of this disease.”

Sharon Hodgson MP, Chair of the All Party Parliamentary Group on Ovarian Cancer and host of the launch event in Westminster, added: “I am delighted to have hosted the launch of Pathfinder once again. It has been wonderful to see not only the progress that has been made in ovarian cancer over the past decade but also the steps that we are continuing to take to ensure everyone diagnosed has the best possible chance of survival.  I know there is more work to do and as Chair of the All-Party Parliamentary Group on Ovarian Cancer I know that by working together we will continue to make progress."

To find out more about Target Ovarian Cancer or access its support line visit www.targetovariancancer.org.uk