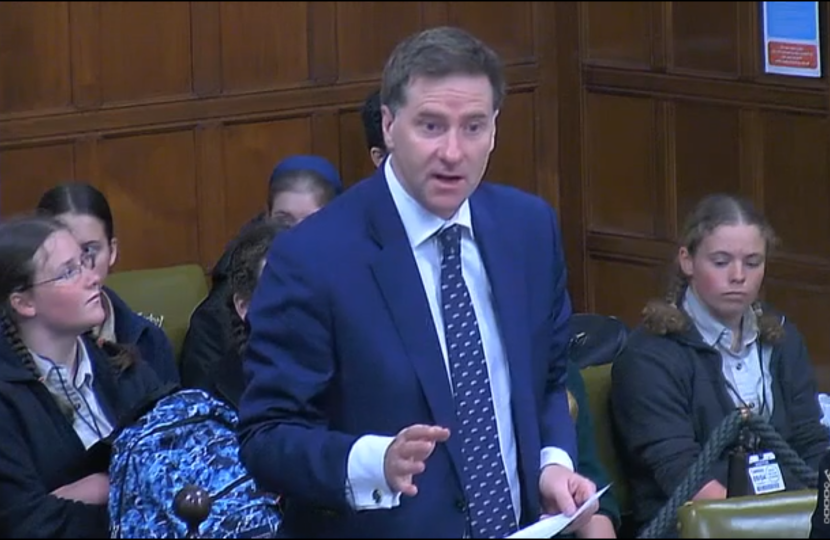 The Winchester and Chandler’s Ford MP, who has one of the largest sixth form colleges in the country here in Peter Symonds, pressed Ministers on the need to close the funding gap identified by the ‘Raise the Rate’ campaign.

From this January children in 11-16 education have £5,000 spent on them each year however the average nationally for sixth form colleges is £4,500. For colleges outside of London in the south it is lower, such as Peter Symonds College in Winchester and, in the case Barton Peveril College in Eastleigh, the per pupil figure is closer to £4,100.  Raise the Rate aims to level up funding to £4,760 per student.

In 2019, the Government announced a 1 year stop gap settlement, which, while welcomed by the sector and MPs working in this area, fell far short of the Raise the Rate campaigns call for more equity with 11-16 education.

Steve Brine MP said; “We all acknowledge there has recently been a very welcome funding announcement for colleges and I campaigned hard for that with the previous Chancellor but, at Peter Symonds for-instance, we’ve a 30% increase in student numbers in the past decade. That combined with rising costs - unfunded increases in the Teachers’ Pension Scheme is one example – mean it’s harder and harder to make the sums add up.

“Barton Peveril College, which serves many students who live in Chandler’s Ford, reports a similar picture to which is why I do back the Raise the Rate campaign and, as I said in Parliament, for the upcoming comprehensive spending review to look to put in place a long-term settlement for sixth form colleges so they can plan ahead strategically. This is especially important in Hampshire where, in the state sector, we have an almost universal tertiary system.”

Sara Russell, Principal of Peter Symonds College in Winchester said; “Peter Symonds is quite rightly proud of its reputation for excellence and indeed celebrated another Outstanding inspection by Ofsted last month. However according to the IFS, post 16 funding is now 6% lower than in secondary schools.  It is difficult to explain why a country that (quite rightly) requires its young people to participate in education or training until the age of 18, reduces per student funding at the age of 16. Plans to guarantee that every secondary school will receive at least £5,000 per pupil next year are welcome, but a similar guarantee should be made for 16 to 18 education.  This would enable us to further develop the excellent education that we are renowned for.  I'm grateful to Steve Brine that he raised the issue of post 16 funding during the Westminster Hall debate and called for a longer term funding settlement that is much needed by the sector'.

Pictured; Steve on his feet speaking in the debate.

Watch above a clip of Steve's speaking in the debate (SBTV)