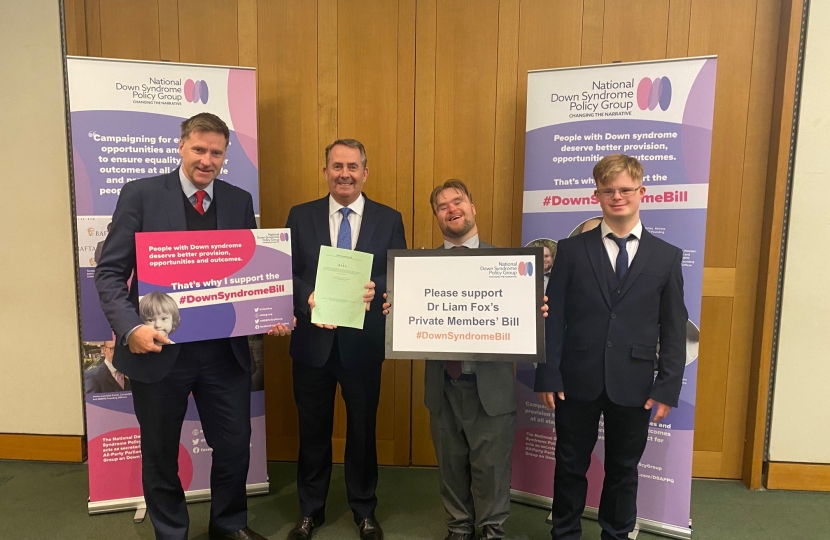 A new Private Member's Bill being brought forward by Dr Liam Fox, Member of Parliament for North Somerset, has been supported by the Government as it comes forward for it's second reading. The Bill seeks to ensure people with Down syndrome will be legally recognised as a specific minority group.

The Bill follows a campaign spearheaded by Winchester's own, Tommy Jessop, who played Terry Boyle in Line of Duty, Dr Liam Fox, the former cabinet minister and Ken and Rachael Ross from the National Down Syndrome Policy Group.

The Bill will put people with Down syndrome on an equal footing with other minority groups to ensure that councils and public bodies such as schools, NHS organisations, social care services and job centres are required to meet the specific needs of people with the condition.

It will stop people with Down syndrome from being treated more broadly as a disabled person, which means their needs are often neglected and their abilities not recognised.

Winchester's MP, Steve Brine has spoken in support of the Bill, saying; “I am delighted to support Liam Fox on this. It’s a really important piece of prospective legislation and I know it has the potential to make a huge difference.

Over many years I have known closely the work of our superb Blue Apple Theatre Company in Winchester and am grateful to all the constituents who brought this Bill to my attention.”

What do we want Winchester to become over the next ten, twenty, years?

It’s a question I hear a lot as I go about my work and it’s not a new one. Like many readers, I remember attending the ‘Vision for Winchester’ event at the Theatre Royal in March 2007. I am not new to Winchester.