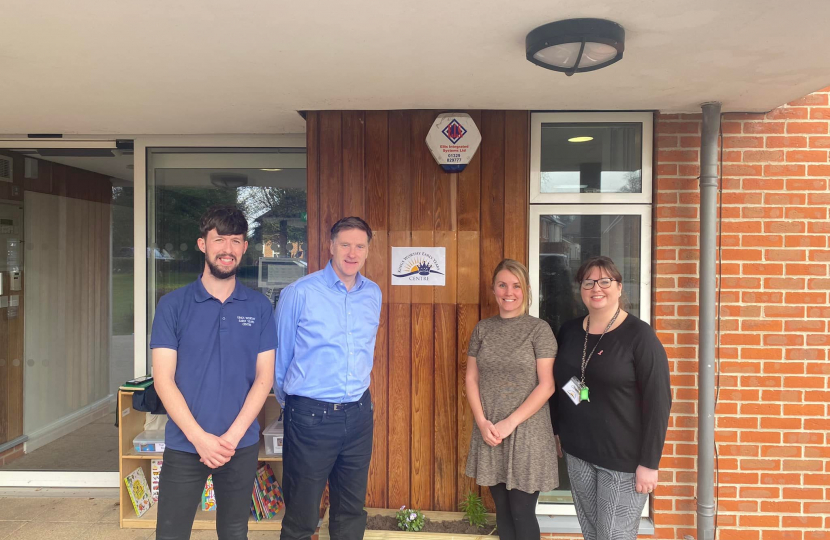 The MP for Winchester dropped into the new Kings Worthy Early Years Centre, which has taken over the contract to provide the service adjacent to the primary school, following an uncertain period last year which saw the previous team announce its closure.

Mr Brine was contacted by a number of concerned parents who feared the end of this form of early years provision in the village. He subsequently chaired a session with parents, pre-school, primary school and Hampshire County Council to agree a way forward.

Hannah Green and Gemma Shergold from the Early Years Group have taken on the challenge with new manager, Joe Fuller and they report strong numbers for the Spring term and a positive future for the setting. The Kings Worthy Early Years Centre says it will have thirty children on roll after the Easter holidays.

Speaking afterwards Steve said; “This was a visit I had been looking forward to with a real sense of anticipation after last year when the old Kings Worthy Pre-School announced it would be closing. It was a real blow to the local community and we had to secure a new operator to protect a service many parents, without transport, can walk to each day.

“It was great to meet the new team and I wish them the best of luck for the future. I’d also pay tribute to HCC for the positive way they have engaged with us all and made sure this service remained in Kings Worthy.”

Hannah added; “We are just delighted to have been able to take over operations and operate an Early Years Setting on the site of Kingsworthy Primary School and look forward to a bright future.  Our immediate plans since our take over were to focus on the children, settling them back into the setting as well as welcoming new families.

“Future plans include working alongside the school to ensure that the children get the best possible start in their early years education and are ready and willing learners as they move up to primary school.

“We look forward to undertaking lots of work on the environment within the centre both outside and out, after all the environment plays a huge part in supporting the children’s learning and sparking their curiosity.”

In his role as chair of the All-Party Parliamentary Group for Childcare and Early Years, Steve Brine works nationally to advocate for the sector.