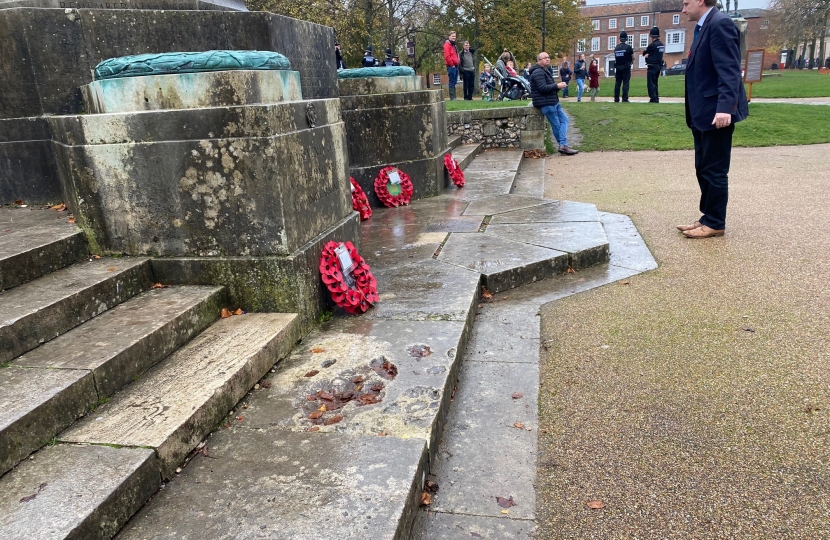 Despite the ongoing Coronavirus pandemic, Winchester stopped to remember the fallen today. The official ceremony was much reduced, but the sentiment remained that we will remember all those who gave their tomorrow for our today.

City MP Steve Brine was unable to take part in the official ceremony due to Covid restrictions, but laid his own wreath afterwards with his family. He said afterwards "As always it was a humbling experience to lay a wreath on behalf of my constituents, and the current restrictions have only added to the sombre feeling in today's Remembrance Service"

Throughout Winchester residents also stood on their doorsteps at 11am to share in a united two minutes silence to remember all those who are currently serving, those who have served in the past, and those who have given their lives.

Usually thousands would gather at Winchester Cathedral to take part in the city's annual Remembrance Sunday service, with members of the Armed Forces and veterans joining youngsters from the Scouting movement and the public for the commemorations.

This year the Very Rev Catherine Ogle, Dean of Winchester, held a service alongside members of the cathedral clergy which was live streamed to the public.

Wreaths were then laid in front of the war memorial by a small number of civic dignitaries, including the Mayor of Winchester Cllr Patrick Cunningham, along with service personnel and representatives from local organisations.

Members of the public were encouraged to light a candle in the cathedral, in the week leading up to Remembrance Sunday.

Following the service, people are now invited to lay wreaths by the city’s war memorial or crosses can be placed in the nearby Royal British Legion Garden of Remembrance.

Pictured; Steve laying his wreath after the ceremony

December 3rd may be the first day of the rest of our lives but, for many, it will feel a lot like the day before as the Covid nightmare continues.