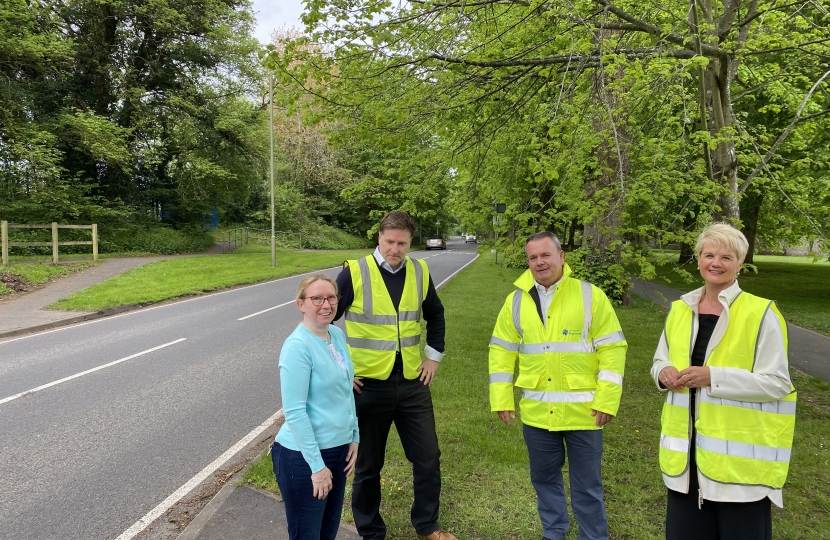 As Summer term continues next week, there’s a renewed push to address what campaigners say is an “accident waiting to happen” outside a popular Alresford school.

Every day hundreds of young people cross The Avenue in Alresford at the start and end of the day to attend Perins School in the town.

Many are dropped off in the Arlebury Park car park meaning they cross the busy road at peak times. The spot is complicated by buses which stop to drop and collect students who live in the Itchen Valley or Winchester.

There have been many attempts in recent years, including a resolution from the New Alresford Town Council, to install a crossing at the site but no action has been taken.

So Local MP Steve Brine and newly elected City Councillor, Fiona Isaacs, brought Cllr Rob Humby of Hampshire County Council to see the situation for himself on the morning of Friday 28 May.

Steve Brine, who has been a parent at the school himself this year, says; “There have been calls from parents and teachers for some time to make this crossing point safer but things are really coming to a head as things get much busier on the roads and in particular as a new bus contract comes into force from September.

“We are extremely grateful to Cllr Humby for visiting Alresford and have agreed to work together - with the school - on a series of measures around the future bus contract and, yes, a crossing. Councillors have buzzed around this subject for too long without actually changing anything. Now is the time for action because The Avenue is an accident waiting to happen.”

Parent Wendy Osborne joined the site visit and said; “This really is a dangerous crossing point on The Avenue. Many children use it on a daily basis and without a safe crossing, it is only a matter of time before a child is run over.”