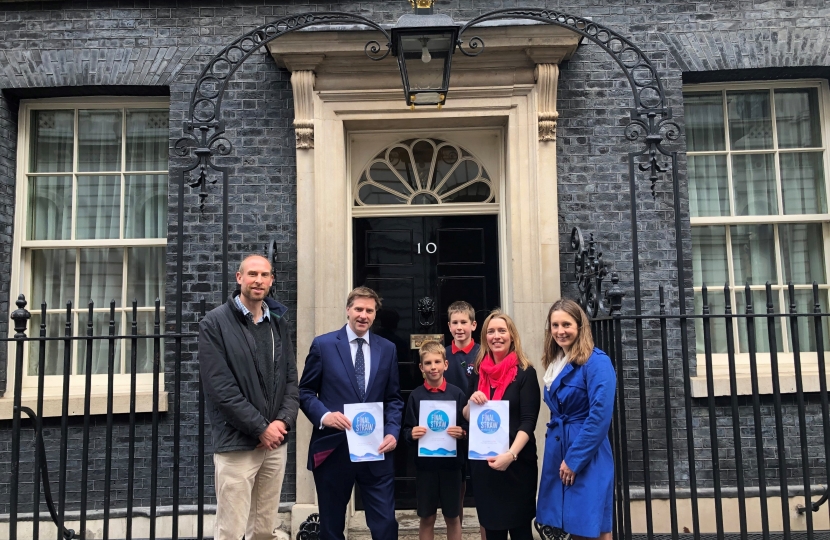 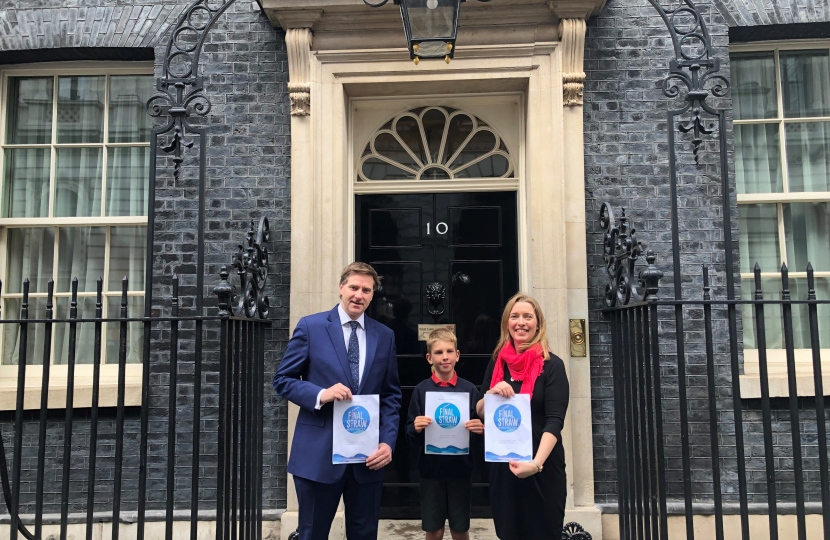 The winners of a local competition held to tackle the scourge of single-use plastics visited 10 Downing Street on Thursday 28th February after Final Straw Winchester teamed up with local MP Steve Brine.

Michele Ingerslev launched Final Straw Winchester in January 2018, which works with local businesses to get them to pledge to stop using plastic straws with their drink offering.

She teamed up with Steve Brine last spring, and 27 businesses are on board to date. They came up with ‘Silly Straw Saturday’ which was launched at St Bedes School. It ran over the summer months, and raised awareness among local school children of the need to eliminate the use of single-use plastic straws, alongside the wider plastic-free campaign.

Children sent in pictures using the silliest reusable straws they could find, and the winners were Ed and Tom Duxbury from central Winchester.

Michele of FSW said: “I was thrilled to be part of Ed's amazing trip with his family (as winner of SillyStrawSaturday), to the front door of no.10 and the House of Commons today. I'm really pleased that my Final Straw Winchester campaign has begun to inspire and enthuse young people, the next generation; especially Ed and Tom. As a result of meeting Ed's older brother today, I'm hoping to follow up with Tom at his school to his eco reps, to provide a talk about reducing the use of single-use plastics and how I set up my campaign.”

Mum Victoria Duxbury said: “We had a fantastic day! It was such a privilege to get so close to the REAL 10 Downing St and especially to go behind the scenes at the Houses of Parliament. We are huge fans of Final Straw Winchester and everything Michele is trying to achieve.”

Ed Duxbury said: “It was amazing to walk through the big black gates at the end of Downing St. I was surprised that No 10 was such a big house and it was so exciting to touch the front door!

Tom Duxbury added: “I loved going to the Houses of Parliament and passing all the old books. Watching the debate on carbon emissions gave me some great ideas to take back to school particularly in my role as Head of Eco!”

Steve Brine said: “I was thrilled to welcome the Duxburys, and Michele of course, to Parliament today and to take them up to the iconic door of No 10.

“I am sure they loved the afternoon, including our mini-tour of Parliament and popping into the gallery.

“This was a bit of fun but it remains a serious message because the threat to our planet and wildlife from discarded single-use plastic straws is very real.

“As I have said before, we know children get this message 100% so hopefully the competition went some way to spreading the message to the grown ups in their lives!

"The wider point is around changing behaviour and much of what we're doing in Government seeks to move away from large scale plastic use. If we can someday get to a plastic-free, green Winchester that would be a prize worth having."

Pictured; Steve Brine and Michele Ingerslev with the Duxbury family outside No 10 Downing Street

You can find more information about FSW on FB: FinalStrawWinchester and Twitter: @finalstrawwinch