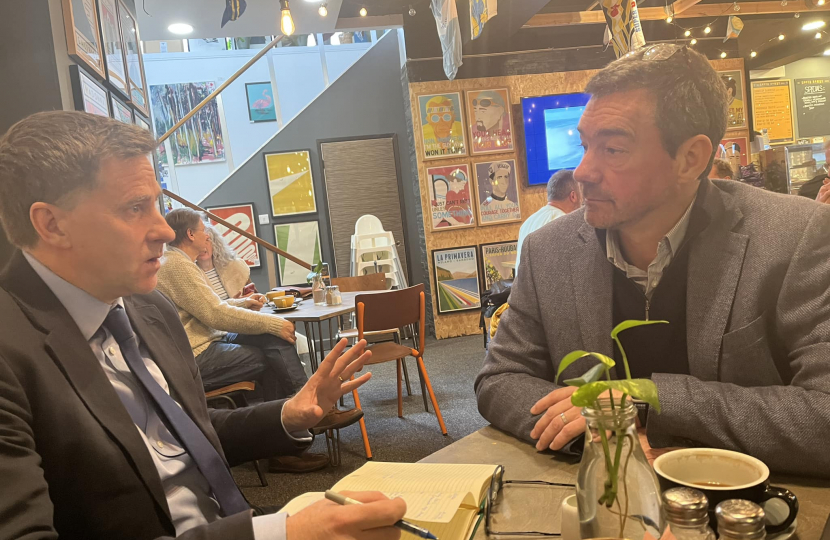 Mr Brine had called the meeting - which took place at the Winchester Bike Cafe in Middle Brook Street - to understand what caused the lack of water supplies just before Christmas in part of his constituency and what work is going on to do everything possible to avoid a repeat.

Supplies were completely turned off across parts of Chandler's Ford, Hursley, Twyford and Otterbourne as well as Badger Farm for as much as two days in places.

The company explained how December's big freeze - followed by a rapid thaw - led to burst supplies across the network and among customers which drained reservoirs rapidly. The company claim to have fixed 15m litres of leaks on its own network alone in a 48-hour period.

The issue was compounded by a deluge of rain into the water supply works at Otterbourne (and Testwood) which meant the efficiency of those sites, to create new water fit for consumption, was seriously impeded.

Mr Brine heard how a major piece of work - worth £800m - is underway at both locations to upgrade them to mitigate similar issues in future. He said he would be visiting the Otterbourne site shortly to see progress.

The MP also raised the issue of combined storm overflows which can force sewage and other foul water out of the Southern Water system into waterways and coastal waters. He will this month visit Southern Water's 'Pathfinder' site near Andover which is part of the investment required by the recently passed Environment Act to end the practice whereby storm waters combine with foul water in the same system and overflow to prevent waste water being forced up into homes.

Mr Brine also raised the issue, recently reported in the Hampshire Chronicle, of a leak at Brambridge near Otterbourne which is reportedly seeing sewage escape through a manhole cover into the road and nearby River Itchen. "This needs sorting urgently, no excuses, just sorting out," he said after the meeting.

Speaking after the meeting, Steve Brine said; "The supply issues that affected a number of my constituents in Christmas week were a total nightmare and, while I understand a perfect storm of events made it unavoidable in part, needed to understand on their behalf how we got to a position where people were queuing for bottled water to flush their toilets and do many other basic households tasks just a few days before Christmas.

"Mr Gosden told me Southern Water will shortly be writing to affected customers with their full explanation as to what happened - and why - alongside details of compensation due. That needs to take place without delay as I made clear at our meeting.

"Finally, I raised the urgent matter of a possible sewage leak at Brambridge and have asked for an urgent report so we can assess whether it's been dealt with and, if not, when it will be."

The meeting also covered the impact of December's supply issue on priority vulnerable customers, key infrastructure such as Winchester Hospital and business customers including farms who were left in a serious situation with no water to give to livestock. Mr Brine said he will be raising with DEFRA Ministers a system whereby water companies are not directly responsible for supply to business customers.

Farms, and all business customers, receive water from companies like Southern as the wholesaler but a third party retailer handles the customer relationship in a system the MP said was "fractured and unaccountable".