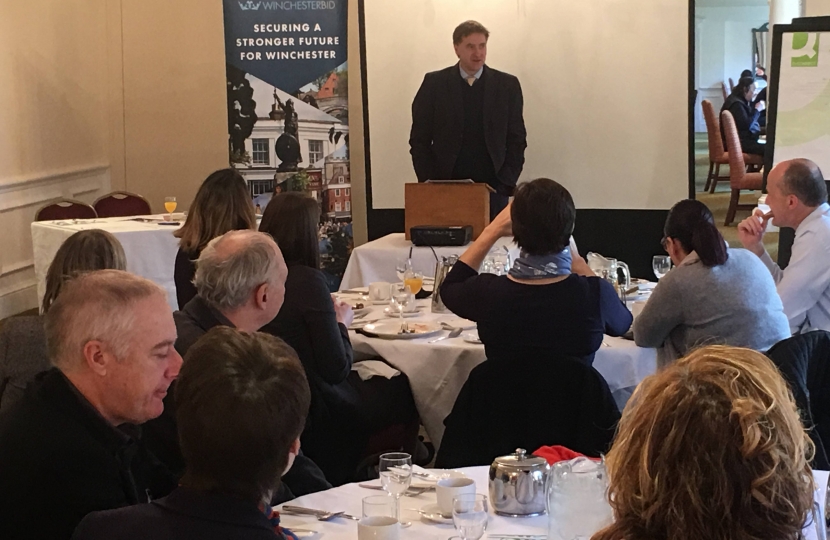 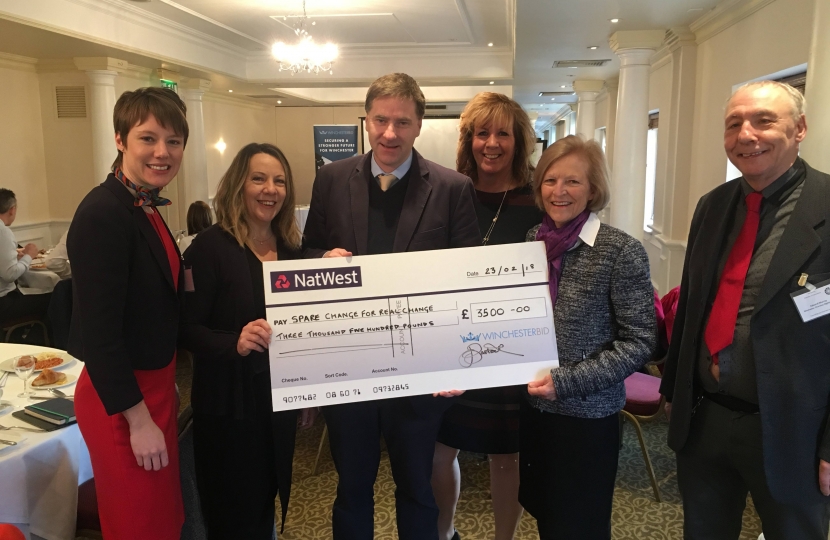 Steve Brine spoke about the importance of Winchester delivering on its key projects as he addressed a business breakfast in the city on Friday 23rd February.

The Winchester MP spoke to key members of the business community at the Mercure Winchester Wessex Hotel at the annual event, organised by Hampshire Chamber of Commerce and backed by Winchester Business Improvement District. He also highlighted how the UK claimant count remains at 2.5% - the lowest since 1975, with full-time employment making up over two-thirds of the annual rise. In Winchester, he confirmed that the total number of unemployed claimants in January was just 405. This represents a rate of 0.9% of the economically active population aged 16 to 64 ranking the city 618th of the 650 UK constituencies.

He was also pleased to note that, after the Government promised a balanced recovery back in 2010, the Office for National Statistics shows that since then, over 60% of the growth in private sector employment has been outside London and South East.

Looking more locally, he was keen to stress Green Impact, a free scheme coordinated by Winchester City Council and the National Union of Students which supports local businesses to reduce carbon emissions and operational costs making Winchester a greener, cleaner place to live and work. Last year was the UK's greenest ever with lowest carbon emissions of any G7 country, and Mr Brine emphasised the important social responsibility of being a business in Winchester.

Speaking afterwards, he said: "This event is a great chance for me to engage with the business community and to get across some of the key things we're doing in Government as well as talk frankly about some of the current challenges facing our city."

Attendees also heard from Catherine Turness, Executive Director of Winchester BID, who took the opportunity to talk about the work they are doing to improve Winchester's business environment and promoted the upcoming Winchester Business Excellence Awards.

Both Steve Brine and Catherine were also on hand to present Spare Change for Real Change with their annual cheque from local businesses. The scheme, which Steve originally helped to launch, supports local homeless charities and allows people to give to official collection points rather than directly to homeless people. This year, they received £3500.