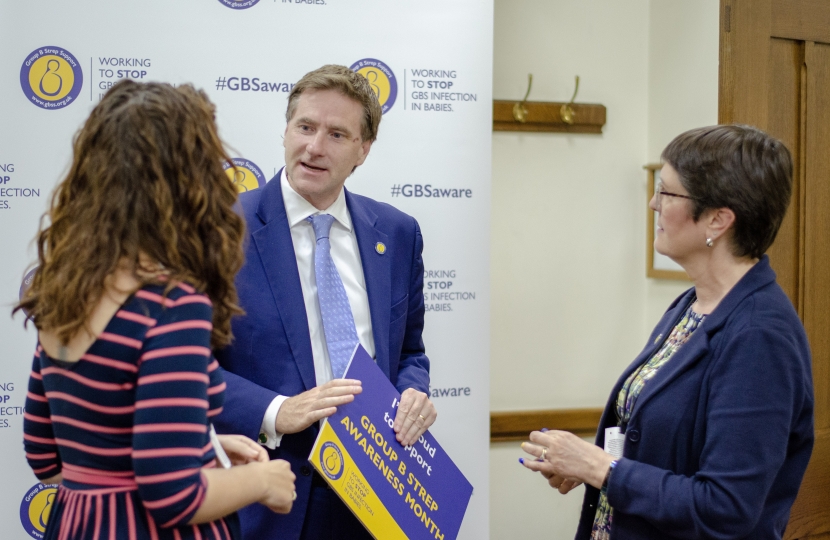 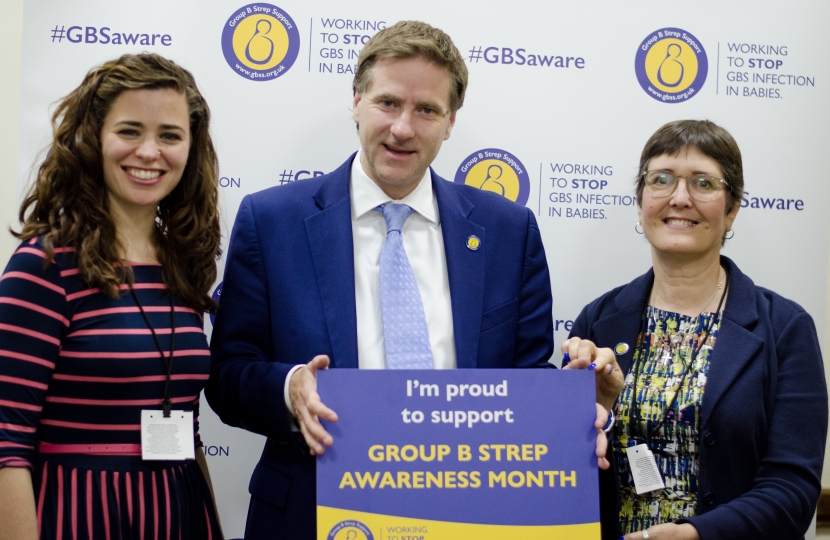 Steve Brine was a guest at Group B Strep Support’s parliamentary event on 3rd July to raise awareness of group B Strep infection in newborn babies.  The event marked the start of July’s Group B Strep Awareness Month.

Steve was in post as Public Health Minister when Group B Strep Support (GBSS) and the Royal College of Obstetricians and Gynaecologists launched a joint patient information leaflet about group B Strep. Steve took a question about this in Health Questions where Melanie Onn and him were waving copies of the leaflet at each other to promote awareness across the Chamber.

This led to a meeting with Steve and GBSS, alongside Melanie Onn, Anita Dougall of the RCOG, and Paul Cosford of Public Health England, which discussed ways they could all work together to improve awareness of group B Strep.

Steve Brine said: “Educating pregnant women and their families about group B Strep, which around one in four pregnant women carry, is absolutely essential.

“I worked hard on this as Public Health Minister, and fondly recall this event last year, where I was able to follow up with Public Health England on their behalf.

“I was pleased to learn that there is a new NIHR-funded clinical trial starting on group B Strep testing, but this won’t report until 2022, so it’s important that we continue to raise awareness of group B Strep in the meantime.”

Most group B Strep infections in newborn babies can be prevented by testing the mother late in pregnancy and providing intravenous antibiotics during labour to those who test positive. This reduces the risk of a baby developing a group B Strep infection by up to 90 per cent. The test would cost the NHS just £11 and costs £35 privately. Pregnant women can take a simple, safe test between 35 and 37 weeks.

The UK does not routinely test pregnant women for group B Strep, unlike the United States, Canada, Germany, France, Spain and many other developed countries where all mothers-to-be are tested. The bacteria may be passed unknowingly from a mother to her baby around birth.

In the UK, there has been a rise of almost a third (31%) in the rate of group B Strep infections in babies under three months of age since 2000, despite risk-based prevention guidelines being introduced in 2003. By contrast, in countries that routinely test pregnant women for group B Strep carriage, the incidence has fallen dramatically, by up to 86%. The rate in the United States of early-onset GBS infections (those in the first six days of life) is now less than half that of the UK.

Jane Plumb MBE, Chief Executive and founder of Group B Strep Support charity, said: “The current UK policy on group B Strep is not working. At present, pregnant women are assessed for risk factors or group B Strep developing in the baby. However, we’re missing lots of babies whose mums don’t have risk factors but do carry the bacteria. This means we’re putting newborns at a terrible risk of dying or suffering from a devastating long-term health condition. This situation cannot continue.”