Steve Brine MP visits Condor to check out their e-bikes 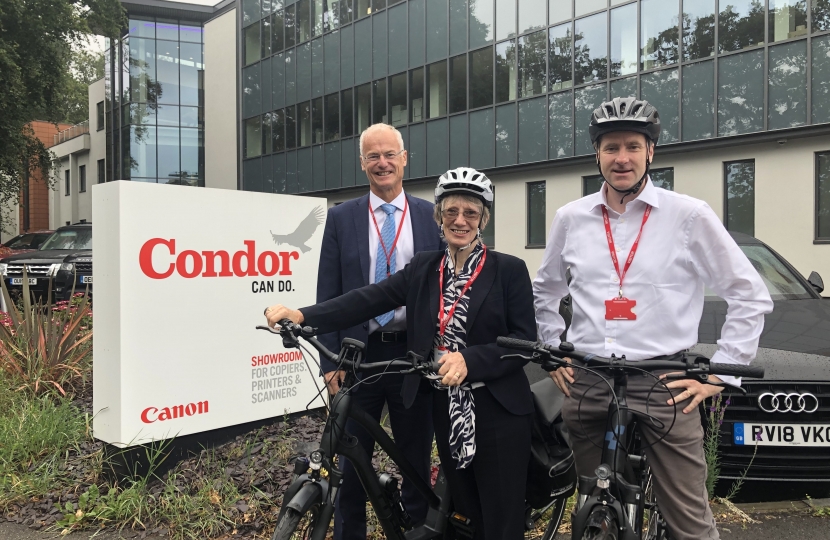 Following a grant from Southampton City Council, Condor Office Solutions company has purchased two e-bikes, and Steve and local Borough councillor Margaret Atkinson were keen to hear more and try them out.

Condor’s David Bayles said: “We thought there was a great potential for e-bikes to cut out short journeys we were doing by car, such as toner deliveries, visiting customers, staff popping out to the shops for lunch, or even going to and from home.

“We’re in the process of training staff up right now, and one of the reasons it will work is because it is great fun. It puts a grin on your face and that’s why staff will be ready and happy to use them.”

Steve Brine said: “This is such a no-brainer and Condor have really embraced it as well as integrating it into their business model for short local journeys making the most of a government scheme delivered through the local council.

“With councils across the country – including at last in Eastleigh - declaring climate emergencies, this could play an important part in reducing short car journeys and the Borough playing in part in getting to net zero carbon. It’s also tremendous fun and more cycling, for health reasons as well as traffic and air quality, is a fine end in itself if you ask me.”

Cllr Margaret Atkinson added: “This is something I want to take back to Eastleigh Borough Council to promote the use of e-bikes throughout the borough. It’s a fantastic initiative and I must admit I thoroughly enjoyed riding the bike!”