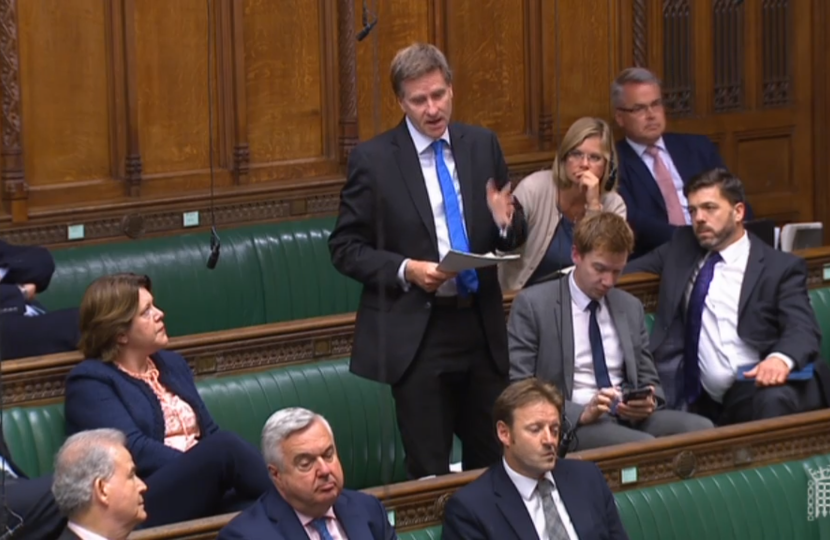 Steve Brine raised Brexit preparations across Hampshire in the House of Commons on Wednesday 25th September.

As well asking for assurances on the roll-on roll-off port of Portsmouth, the Winchester MP told of his concerns about lorries being parked on the M27, as well as the A31 in his own constituency.

He acknowledged that Hampshire County Council had already invested ‘significant amounts’ of money in preparatory work for that, but wanted reassuring that Hampshire “fills its share of this new welcome government investment” to prepare for a no deal exit if it happens, and that the latest Department for Transport modelling was working with the Local Resilience Forum in the county so they can plan “practically and responsibly” for whatever scenario comes forward.

Since publishing its early assessments on the potential impact of leaving the EU without a deal, Hampshire County Council has continued to monitor identified risks and put mitigations in place. The County Council’s focus has been to prepare for any potential adverse impact of Brexit on the continuity and quality of its services.

This included an additional £87,500 to Hampshire County Council, bringing the total amount received to date to £262,500. A further £9m will be allocated to Local Resilience Forums. Additionally, on 30th August the Department for Transport (DfT) announced £5m for the four LRFs with major ports in their area, including the Hampshire and Isle of Wight Local Resilience Forum.

Replying for the Government, Michael Gove said: “My Honourable Friend makes a very important point. Portsmouth is one of our most important ports and it’s important for a host of reasons for the commercial life of this nation, for access to medical supplies, and of course for access to our Crown Dependencies and the Channel Islands.

“It is the case that we do need to work closely with the Local Resilience Forum in Hampshire in order to ensure they understand what our modelling assumptions are and take appropriate steps, and I know it is the case that the Secretary of State for Transport and the Secretary of State for Housing, Communities and Local Government have been in touch with the LRF recently. Obviously more work needs to be done.”

Get Ready For Brexit