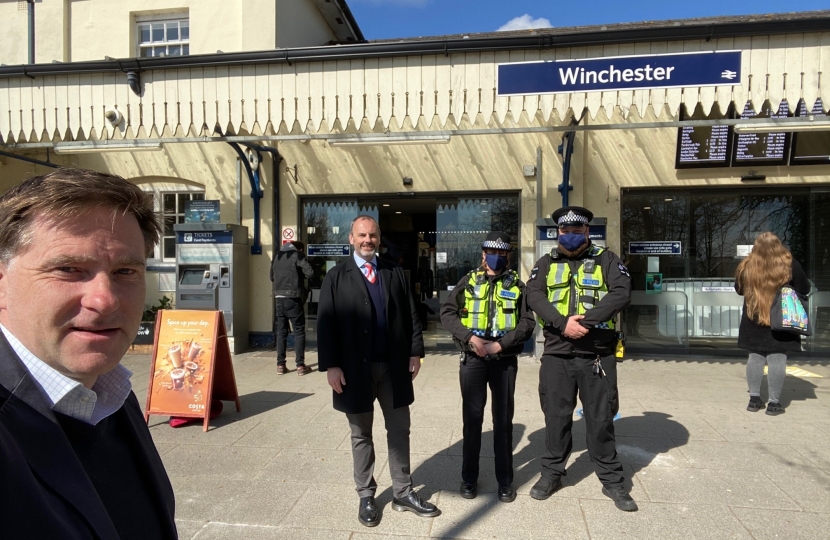 Winchester MP Steve Brine joined officers from the British Transport Police at Winchester station this morning as they carried out an important county lines operation.

Joining Detective Superintendent Gareth Williams, Steve was taken through the work of the county lines team in combatting the practice it and protecting vulnerable young people across the UK.

Speaking after the visit Steve Brine said; “After ten years in public I am not easily shocked by things, but it never ceases to amaze me what I hear. So-called county lines drug running into places like Winchester is a menace and the BTP team are doing superb work to try and disrupt it.

“I welcome operations such as these and it’s so important that the police are tough and out in the open showing a strong, but supportive, face.”

BTP County Lines Taskforce lead, Detective Superintendent Gareth Williams, said: “It was great to meet with MP Steve Brine and introduce him to officers from our dedicated Taskforce at one of our deployments in Hampshire.

“This is just one example of the proactive operations we deploy nationwide to make the railway a hostile environment for organised criminals and disrupt the County Lines drug supply business model.

“A key aim of the team is to identify and safeguard vulnerable children and adults often exploited by these organised criminals to transport drugs and cash between import and export locations, which can be hundreds of miles apart.

“Everyone that uses and works across the rail network has a vital role to play in being our eyes and ears. We’re encouraging these people to look closer for the signs of child exploitation on the railway and report these concerns to us. You can do this by texting 61016 or calling 0800 40 50 40."

Pictured; Steve with Det Supt Gareth Williams and members of the team at Winchester Railway Station.