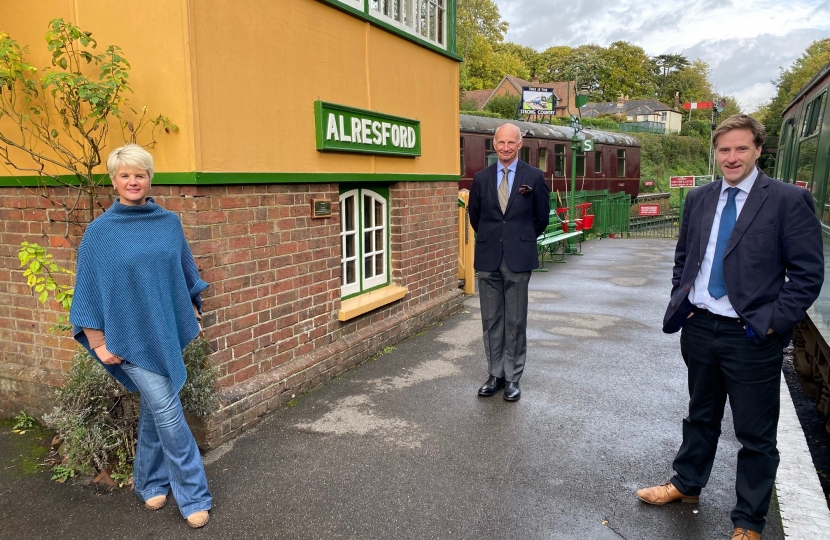 One of Hampshire’s premier visitor attractions, Mid Hants Railway ‘Watercress Line’ has been awarded £600,000 from the government’s Heritage Recovery Fund with the news welcomed by MP for Winchester, Steve Brine.

The grant, which is in addition to the National Lottery Heritage Fund grant of £250,000 announced earlier in September,  will fund staff costs throughout the winter period when trading revenue is expected to be low because of the impact of coronavirus.  It will also allow various developments to assist the railway to cope with the COVID-19 restrictions such as erecting screens in carriages, alterations to dining trains, additional signage, introducing an up-to-date ticketing system to maximise revenue and a top up sum towards the new children’s playground at Ropley.

With the railway having recently announced its brand new, world-first ‘Steam Illuminations’ event running from 14 November to 3 January 2021, the grant comes at a crucial time and will help cover the cost of this.

Richard Lacey, Chairman of Mid Hants Railway ‘Watercress Line’, said: “This is wonderful news for us.  It clearly shows that there is confidence in our ability to ride out the effects of the pandemic and it will secure the jobs of our paid staff.  We are extremely grateful to the government for the excellent support we have had through the last very worrying six months.  It’s very reassuring; we now can be sure we will be here in 2021 providing services that visitors want and contributing in full measure to the health of the local economy.”

Local MP for Winchester, Steve Brine, said: “Alresford is such a special place and we all value its vibrancy, and its independent shops. The Watercress Line is such an important part of that, so I hope this grant from the Culture Recovery Fund secures the future.  The Mid Hants Railway is also a unique employer locally, keeping alive many special skills and helping our future engineers find their way.”

The Watercress Line is one of 445 heritage organisations across the country set to receive a lifesaving financial boost from the government thanks to the Culture Recovery Fund and will see the attraction share £103 million to help earmarked to start vital reconstruction work and maintenance on cherished heritage sites, keeping venues open and supporting those working in the sector.

Simon Baggott, Watercress Line General Manager, said:  “We are enormously grateful to have been awarded this grant, which will be warmly appreciated by everyone who visits the railway, volunteers or works here.  Being able to fund the staff over the winter will allow us to maintain the key engineering skills essential to the business and the associated training of young employees.  We are looking forward to welcoming more visitors back to the Watercress Line over the coming weeks, to our Autumn Steam Gala, Steam Illuminations & Father Christmas at the Watercress Line.”

The Watercress Line is Hampshire’s only mainland standard gauge heritage railway, running for 10 miles through idyllic countryside between the market towns of Alton and Alresford.  The line first opened in 1865.  Part of British Railways prior to closure in 1973, the line and services were fully reinstated in 1985.  Today, the Watercress Line is one of the South’s premier visitor attractions.  It employs nearly 50 staff, and is supported by over 450 dedicated volunteers, without whom it could not function.  It is committed to preserving Hampshire’s railway heritage and maintains a fleet of steam and diesel locomotives, rolling stock and infrastructure that creates the essence of a bygone age.  Training of the next generation of heritage railway engineers is seen as an essential part of the business.  The railway provides a comprehensive timetable with trains running on some 200 days each year and which include many special events such as steam and diesel galas, A Day Out with Thomas and War on the Line.  Other services include The Real Ale Train (RAT), The Watercress Belle and the Countryman Dining Trains.  The Watercress Line typically carries some 135,000 passengers a year and has a turnover of £2.75m.

The Watercress Line started running trains again on July 11th, but with substantially reduced capacity for visitors due to social distancing measures, which also add extra costs.  Whilst they have safely carried over 10,000 passengers since then, this is less than 25% of what would normally be expected and many of the higher revenue services had to be curtailed.

This grant will protect the heritage line until next year and enable an even better and safer visitor experience, as well as allowing its well-known events to come back in 2021

Winchester High Street boasts a new Charity Christmas Card shop from this week. Located in the old Whittard’s shop (next to Costa) the shop will sell cards and gifts on behalf of local and national charities until the middle of December.