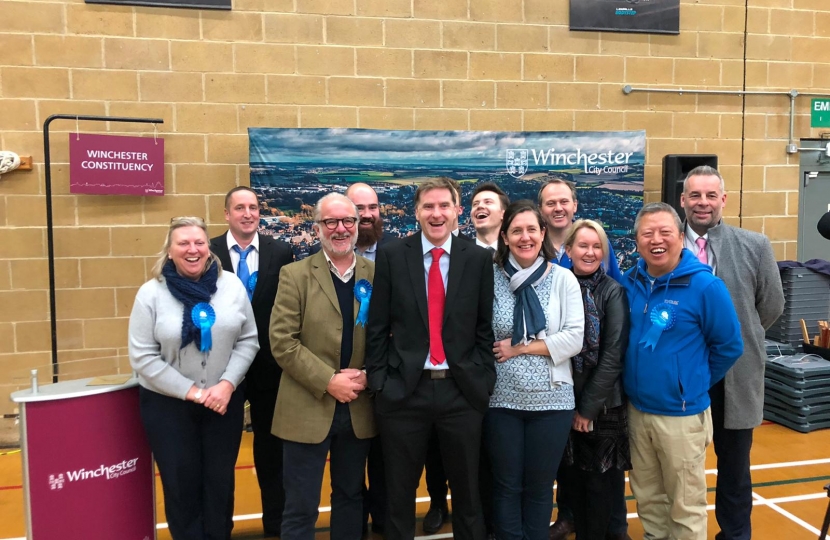 Steve Brine has been re-elected as the Member of Parliament for Winchester and Chandler’s Ford once again, receiving 28,430 votes.

The election, the fourth in a decade, was called by Prime Minister Boris Johnson, as he did not have a majority in the House of Commons and wanted to ‘unblock Parliament’.  The Winchester result was announced at 5.30am from the count in the River Park Leisure Centre.

Steve dedicated the victory to his dad, who during the campaign has been gravely ill. “It is not a battle he is going to win. But now this campaign is over I might get to spend more time with him.”

He said he would go into the next Parliament as a one-nation Conservative. "I want the next Parliament to be for the moderates and I will be right there at the heart of that. This one needs to last as the country is crying out for some stability and some leadership."

Steve then spoke about his priorities for representing Winchester and Chandler’s Ford in this new Parliament. “I am incredibly humbled by my constituents for returning me for a fourth time. I’ve always said that nobody owns Winchester. You have to earn the right to represent this seat. It’s been the greatest privilege of my life to represent this seat for almost ten years and I will do it to the best of my ability for as long as I serve.

"We now need to get on and ratify the Withdrawal Agreement Treaty, so we can talk about all the other things that matter to my constituents, like the Climate Emergency, which for me is the real page one story at this election, and hasn’t had anywhere near enough coverage.”

Pictured; Steve celebrating with his campaign team at the count.