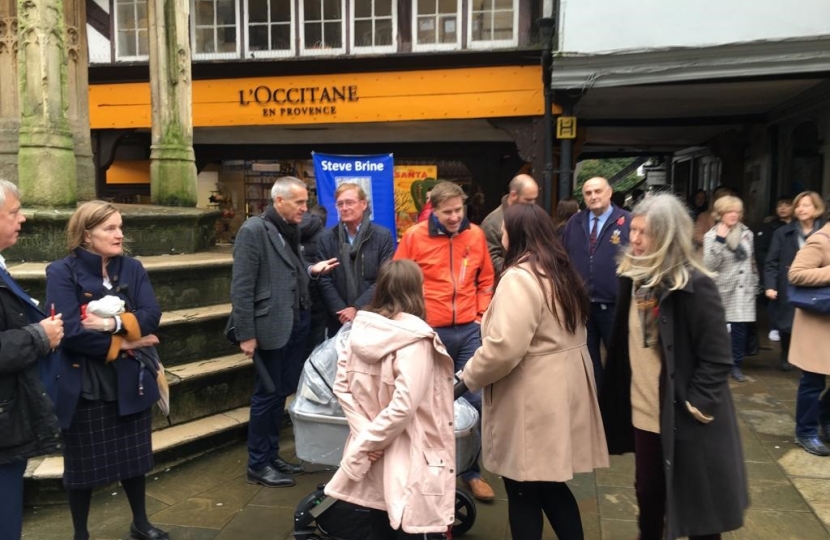 Local MP Steve Brine kicked of the 2019 General Election in energetic style with a street surgery at the Buttercross in Winchester High Street.

Steve, who has served as MP for the Winchester and Chandler's Ford seat since 2010, was reconfirmed as the Conservative candidate the night before and will contest the constituency for a fourth time on 12th December.

Steve Brine MP said; “I don’t think my constituents are thrilled at the prospect of a Christmas poll but it became unavoidable if we’re to unblock Parliament. This is obviously a national election but in many ways it’s a local election and it’s about the kind of MP who represents us.

“I’ve done the job for almost a decade which gives me the strength and experience to ensure our voice is heard and that delivers for our area; significant new investment at the RHCH and a big new funding settlement for local schools are two good examples. I’ve consistently respected the EU referendum result but stood up when it mattered against a damaging no-deal and I know many appreciated that.

“Ten years ago, I promised to be the best constituency MP we’ve had and I’ve worked so hard to live up to that. No one owns Winchester but I’m standing again on my record as a person we know and can trust. It’s worth remembering there’s a great deal at stake and what happens here, no matter how well intentioned, will play a big part in how it ends. After this election we will either have a Conservative Government or one led by Jeremy Corbyn and John McDonnell. It’s a sobering thought.”

Steve and the team will be campaigning right across the area between now and polling day. If you would like to join #TeamSteve and be a part of the winning team, please email steve@stevebrine.com or call 01962 679913.

Pictured; Steve doing his job, talking to constituents in Winchester.