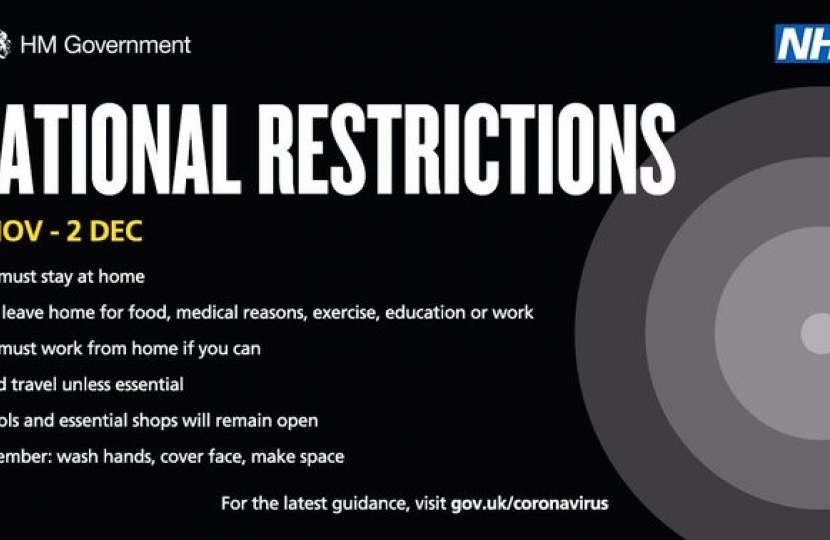 England will begin a month-long lockdown on Thursday it has been announced.

Pubs, restaurants, gyms, non-essential shops and places of worship will close, but schools, colleges and universities can stay open.

Boris Johnson is expected to deliver a statement in the Commons on Monday and MPs will vote on the latest restrictions on Wednesday. Labour has indicated it will back the lockdown meaning the vote will be comfortable carried.

Winchester & Chandler's Ford MP Steve Brine said; “This is a disaster and it’s a failure but the overrunning of the NHS would be a medical and moral disaster so I can see how the Government have little choice now.

“We had a long lockdown in the Spring which led to really low numbers in June-July but we didn’t consolidate that and learn from the seemingly successful East Asian approach. That saw strict border controls, with airport testing, to prevent the re-introduction of infection and a test, track and isolate system that was able to tackle flare ups right away when rates were manageable.

“I am talking intensively to senior Ministers, the scientists available to us and hearing from a large number of constituents so have told the whips they cannot rely on my support in the lobbies on Wednesday evening as things stand.”

Ministers have confirmed the furlough scheme, due to end on 31 October, will continue throughout November but Steve Brine said he would be raising questions about where this left millions of self-employed workers, many of whom were left out of the original Self Employed Income Support Scheme (SEISS).

And Steve added; "Because of the failures I refer to above, I appreciate how Ministers have very few options right now but simply relying on a lockdown that sees this cycle of despair on repeat over and over again is not the answer. I made the point to the PM in the House on 22 September.

"A lockdown and release cycle, which let’s be clear is what we’re now set for without a fundamental change of approach, is going to make the public despair, see consent slip away and harm our economy so much.

"We’re locked into a pattern of listening to the same people and it’s clearly not working. Those East Asia countries :- Taiwan, South Korea, Thailand, Vietnam, Hong Kong, Singapore :- might just have something we can learn from.

"We’re all for global Britain yet, ironically, we have followed the European model - the flu pandemic approach not the East Asian SARS model which is about ELIMINATING the virus. And that is possible, we saw in the Summer how you can catch cases as they come in, deal with flare ups at a local level because as long as we try to alongside the virus we will have major restrictions on our daily lives because it's so infectious. That then sees hospital infections rise and health systems struggle which understandably leads the politicians to reach for the blunt instrument of lockdown to slow things down.

"The issue for me is what it has always been; how do we break the cycle and what comes next."