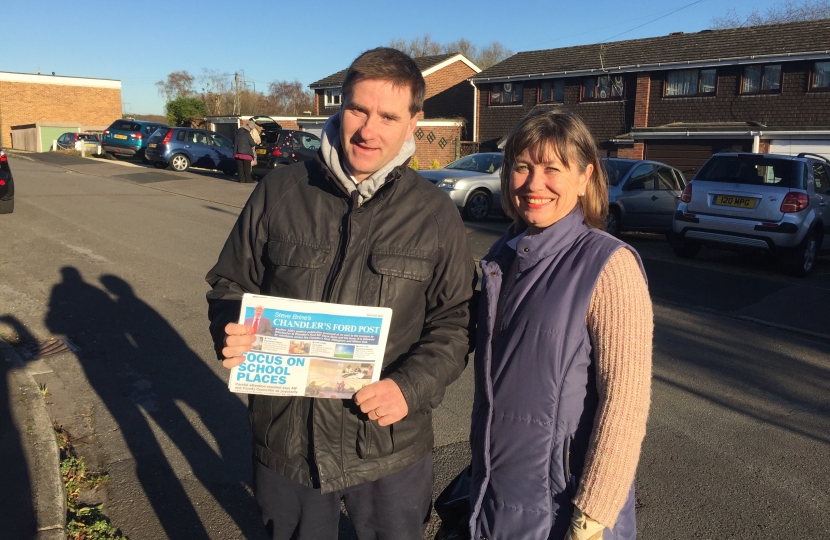 Three Hampshire MPs have written an open letter to Eastleigh Borough Council asking it to halt "the unstoppable march" towards 7200 new homes in Bishopstoke.

The Local Plan option will also include 29,000sq metres of offices and effectively concrete over the last green space in the Bishopstoke area.

All three politicians want to see the council look towards solving traffic and infrastructure issues before committing to any solution.

They also say the council, and its leader Keith House, are going against the wishes of residents and doing so without proper consultation.

"These proposals will require massive and so far unfunded new road infrastructure to deal with the huge increase in traffic and the countryside threatened is of the highest quality," said Mims.

"Many people are also very concerned the new housing would be built right up to the border of the South Downs National Park.

"We urgently need to halt what is increasingly looking like an unstoppable march towards ruining the character of our communities.

"All of us strongly feel it would be a huge mistake and we simply cannot understand why those in charge at the council seem so intent on burying one of the few truly open tracts of countryside left in the area under concrete when other options are available.

"People might think this is political manoeuvring, but all three of us are responding to widespread concerns from local people across our constituencies who are extremely worried this is the plan the borough council wants, and it is our duty to make sure we speak for them with one voice."

George and Steve added they were concerned Eastleigh Borough Council is formulating its plans in isolation and not working with or taking into consideration the impact of development in the borough will have on the Meon Valley, parts of Winchester bordering Eastleigh and those living in Chandler's Ford.

Several communities will be affected by increased traffic, including Colden Common in the Winchester constituency and Lower Upham, Durley and Curdridge in the Meon Valley.

The letter to council leader Keith House is copied below:

We write as the Members of Parliament for Eastleigh, Meon Valley and Winchester regarding the development of the Eastleigh Local Plan and the various possibilities being considered by the council.

We wanted to write to you formally before the plan itself was published in draft form to express our concerns about some of the proposals and options put forward thus far.

It is important that we start by emphasising that we do not oppose the principle of housing development when it is done right. We undoubtedly have a housing crisis in the South of England which can only be solved by building more homes.

We also do not object to the principle of the Local Plan. Indeed, as members of the Government which introduced and championed the Localism Act and the idea of locally-driven neighbourhood planning, we believe that robust and well thought-out Local Plan is an important duty of any local authority.

We also accept that we have not seen the draft plan itself and may find that many of our worries are ultimately groundless when it is published next year.

But, based on what we have seen thus far, we do have real doubts about some of the choices which are being made by the council and the possible consequences of these in the longer term.

Our concerns can be broadly put into two categories; community identity and infrastructure.

On the first issue of community identity, the previous local plan approach (strategic policy S9) suggested a series of gaps within the borough between specific urban areas. This was carried over into Paragraph 7.7 of the Eastleigh Borough Council Issues and Options document in which the council undertook to review the policy relating to gaps.

Our concern here is for the settlements outside the Eastleigh borough, on the boundary of the neighbouring local authorities.ã€€ For example those of Lower Upham, Durley or Curdridge. The current approach to strategic gaps in the document takes no account of these settlements and treats the Eastleigh Borough in isolation.

We believe this approach is fundamentally flawed and that a more broad consideration would act as an effective measure of the true impact of the plan.

We acknowledge that paragraph 7.7 proposes the possibility of adopting the PUSH principle of sub-regional identification of strategic gaps, but again this is unsatisfactory. A sub-regional level of analysis would, in our view, not give the level of detail required to effectively measure the wider impact of the plan.

Instead, we would propose a more detailed 'stepped' scheme which combined previous iterations of gap policy with a broader approach. Were this done, it would be possible to consider the local, intra-district and sub-regional impacts of the plan. By working closely with colleagues at (particularly) Winchester City Council (WCC), it would be possible to come forward with a set of proposals which could meet housing need without fundamentally damaging surrounding communities.

This suggestion of closer working with WCC is mirrored in their own submission to the Issues and Options document. They have requested '...an on-going and meaningful dialogue under the Duty to Cooperate, and a process of community engagement before any sites are allocated or policies drafted which would directly impact on the Winchester District...'

We believe such a dialogue is crucial to the soundness of the plan and should be started as soon as possible. We also believe it would a more detailed analysis of the impact of the plan on the road network.

This brings us to the second key concern, that of infrastructure provision in general and the road network in particular.

Our road network is currently experiencing unprecedented pressures both on a strategic and local level. Strategic Policies S7 & S8 of the previous draft local plan do acknowledge this fact and set-out a plan for the delivery of new transport infrastructure.ã€€ã€€ This detailed Eastleigh Strategic Transport Study produced jointly with Hampshire County Council is both thorough and professional in its conclusions.

Our concerns with this document are two-fold. Firstly, by the very nature of the brief which was given to HCC it again does not consider the impact of the local plan on surrounding communities and pays no heed to the knock-on effect of the additional houses to places like Wickham, Bishop's Waltham and Colden Common.

Indeed, in their response to the Issues and Options document, WCC made clear that they would '...express strong concerns regarding option B which is dependent on a new road to deliver the potential development parcels, and would strongly urge that no significant housing allocations are made in this spatial area until there is certainty that such a road is both deliverable and financially viable...'

WCC also requested clarification '...as to how EBC and HCC would see any road proposals in the Winchester District being delivered. It is extremely important the WCC understands the process, timing and funding mechanisms required to bring forward the road proposals and how Eastleigh views any uncertainties over the reliance on land outside of their borough, impacting on the soundness of their Local Plan...'

Our second issue with the Strategic Transport Study document is that, as set-out in paragraph 1.3.6, prior to the new Local Plan being brought forward a number of pre-emptive developer-led housing schemes have been brought forward across the Borough. These sites now require consideration and appraisal across a range of criteria, one of which being transport.ã€€ These do not appear to have been considered thus far.

Given the age of this document (December 2015), we do not feel that it alone should form the transport evidence-base for the emerging local plan.

Instead, we would suggest that you meet with Highways England, Hampshire County Council and other key stakeholders to agree on the preparation of a broader document which charts the impact of the local plan on both the Eastleigh Borough and surrounding infrastructure (including the motorway network) and which is more up to date. We would also suggest that, given the likely strain on road infrastructure of the Local Plan, that transport considerations should include pre-emptive and windfall sites.

We would be most grateful if you could consider the points which we have raised.