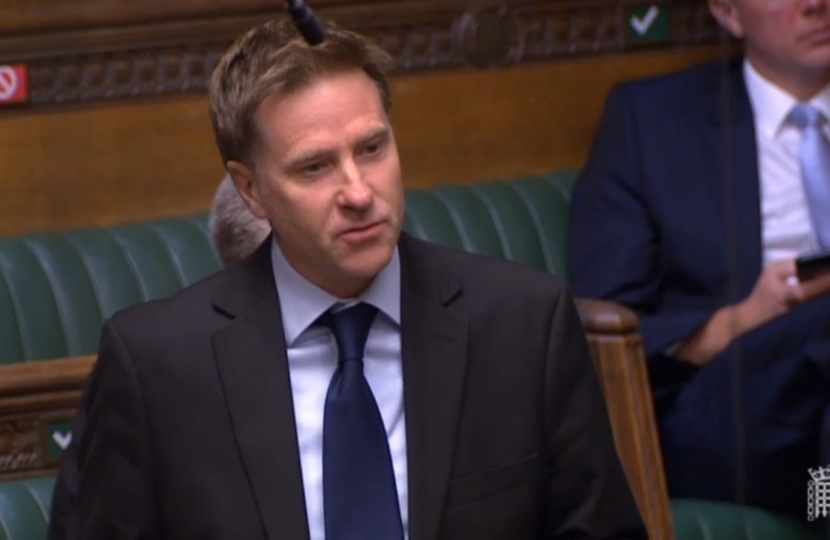 On Monday I asked question 96 (out of 100) in the Prime Minister’s Statement to the House which kicked off various debates this week leading up to this evening’s vote.

The vast majority were pleas for religious worship or certain sports to be exempted from the proposed Lockdown 2.0.

It’s not to say attending church services, playing golf, tennis, archery - even Sunday league football - are not important and their ban doesn’t make any sense but, for me, they rather missed the point.

My question was more strategic than practical because that is what I think we’ve been missing this whole time.

That’s not to say we haven’t had one - we have - to suppress the virus until a vaccine comes.  It’s just been the wrong one.

Neither is it to say we’ve been too draconian - we haven’t - we’ve just put that focus in the wrong place by locking down far too wide and doing far too much damage in the process.

I asked Boris Johnson what he thought we did not do in June and July - when rates were right down after lockdown #1 - and what therefore might the lessons be for after 3rd December when we’ve endured lockdown 2.0.

The PM was very candid in his reply. “NHS Test and Trace”, he said, “has achieved many things with the 500,000 capacity now per day. Where I think we should have pushed harder was on actually insisting that, when people were contacted, they isolated. It does not look to me as though the numbers or the proportions have been good enough. We need to get those up in the next phase.”

And it’s the next phase, and what “get those up” actually means in practice as I put in the Commons today, which concerns me now.

The Health Protection (Coronavirus, Restrictions) (England) (No.4) Regulations 2020 were never in danger of not passing; Kier Starmer’s pledge to support them saw to that and, given the SNP don’t vote on English only business, the Government’s majority was nearer 150 without Labour votes.

That we are here again facing a national lockdown is, in the words of the Prime Minister just a few weeks ago, a disaster and I told him in the House this week that my constituents are weary – and some angry – that we are.

It’s a failure on many levels but the overrunning of the NHS would indeed be a medical and moral disaster so I can see how the Government have little choice now as a result.

As you would expect, with other county MPs I talk constantly to the local NHS as well as other senior civil leaders via the LRF (Local Resilience Forum) and the excellent Director of Public Health for Hampshire, Simon Bryant.

They’ve been in contact with us a great deal this week and, while our figures in Hampshire remain in a good place compared to Tier 3 areas, cases are rising.

I am also able to speak directly with Ministers – and the scientists - and we do our best to wade through the endless slides, charts and data sets that sit behind them.

And, of course, I am never short of opinion from constituents who have contacted me in their droves this week; many as a result of my call via social media on the weekend.

Some 75,000 people live in Winchester & Chandler’s Ford so it’s only ever a snapshot but it’s fair to say many who got in touch are opposed to lockdowns because they are ruinous to lives, livelihoods and liberty. That is unarguable given the appalling human cost emerging from lockdown #1.

Truth is, right now, our hospitals locally are not overwhelmed and the daily deaths figure you see reported on the evening news barely register on local data.

Hampshire Hospitals NHS Foundation Trust has the capability - as it proved last month - to test its staff (and many of their family members) on a weekly basis and I suspect that will become a requirement, for which we will be in good shape, very shortly. Furthermore, the Hampshire DPH tells me they are not overly concerned about the University of Winchester or Peter Symonds’ impact on our area as large centres of student population.

But nationally, it’s a more worrying picture for sure and just this morning I was on a call with SAGE member Sir Jeremy Farrar.

Yesterday (on 3rd November) there were 10,971 Covid patients in hospital in England which is 2,376 higher than a week ago.

None of this is conjecture, opinion or a CMO projection, it is fact.

Bearing in mind it’s an average, the R-rate is currently judged to be around 1.3 and that has, we’re told, come down given the measures we have taken in recent months via the Rule of 6, the 3 Tier system and so forth.

It’s why I enthusiastically supported a regional approach and sat in front of the Prime Minister over breakfast at No.10 just three weeks ago to hear him robustly affirm such.

My message then was we need to give it time to work and stop changing the policy.

Indeed this is what I said to the PM (he agreed) in the House on 22nd September; “Surely the reality is that national lockdown has one shot and any repeat of that, with the inevitable unlock that follows, reintroduces an increased element of opportunity for the virus and risk for us, as we are seeing now.”

The questions I have wrestled with all week are would we be able to take R where it needs to go (ie; back below 1) without further incursions on all our lives, are we not locked into a devastating cycle of lockdown and release and can we trust the projection data being used to justify England’s second national lockdown?

Boris Johnson said in the House on Monday; “Our intention is to use this period to get it below 1 and get that infection rate halving, not doubling,” and Ministers say to do that requires more than we’re currently doing.

On the data, I note Professor Carl Heneghan, director of the Centre for Evidence-Based Medicine at the University of Oxford, told the BBC yesterday a forecast suggesting 4,000 daily deaths next month was wrong.

He said; "Mathematically it is now proven to be incorrect particularly the 4,000 estimate of deaths that would occur in December and why that is because it is already about four weeks out of date.”

Indeed Chris Whitty and Patrick Vallance told the Science & Technology Committee yesterday they regretted the figure and admitted it was out of date.

Given the issues of ongoing public consent we face, this is far from ideal if we are heading into a lockdown as a result.

Finally, are we to be locked into a cycle of lockdown and release as my question to the PM from 22nd September feared?

That is the key question for me.

We had a long lockdown in the Spring which led to really low numbers in June/July but we didn’t consolidate that with isolation enough; learning perhaps from the seemingly successful East Asian approach.

Then we needed strict border controls (quarantine was the right policy at the wrong time) with airport testing to prevent the re-introduction of infection and a test, track and isolate system that was able to tackle flare ups right away when rates were manageable.

If we had done that we wouldn’t be merely supressing the virus until science saves us.

If we had we wouldn’t be using the blunt and draconian instrument of lockdown (local or national), we’d be using the temporary and illiberal measures courtesy of the Coronavirus Act to insist when people were contacted, they isolated.

As the PM said to me on Monday, that did not happen in the Summer and we certainly do need to change that in the next phase.

There was too much emphasis on the first T (test) and hitting the rather arbitrary targets set by Ministers and not enough on the trace and isolate part.

I believe, as I said in Parliament on 21st September, “Keep Hampshire Safe” would have far better cut through than a national system and would surely be so much more effective going forward.

We need to bite the bullet on better payments to those asked to isolate, we need do more than “insist” on isolation and we need to better use (and fund) Hampshire’s public health team to do that.

We have quarantine in place for in-bound travellers of course but we need to grip (and do so fast) next-generation testing at our borders and stop re-importing cases. Germany may have a land border with eight other countries; we are an island nation which we should use to our advantage.

Sir Jeremy Farrar told me this morning that he wouldn’t be recommending this second national lockdown if he didn’t believe a vaccine was coming imminently.

So the judgment call for me today was, like many other, do I believe the underlying nature of the disease will be changed through testing as now proposed for Liverpool, through treatments and the much talked-up vaccine?

If I did, then it may be right to have 28-days of damaging lockdown now to reduce cases once again.

It’s clear, Ministers and their officials are very hopeful about shifting the fundamentals soon. They’re not blind to the other costs so I can’t believe they would recommend it if not.

Sadly I am not so sure. We have persisting issues around public consent, science may well not save us and I am far from assured there is a safe landing strip out of lockdown 2.0.

Indeed today’s regulations (section six, paragraph 25) revokes the Medium, High and Very High tiered system altogether so what does it all look like on 3rd December.

Given all of the above, and having wrestled with all of these judgements since Saturday evening, I am not convinced the Government has proposed a convincing change of strategy, learnt the lessons of this Summer or made the case for a change away from the tiered system in favour of an England-wide national lockdown.

For that reasons I could not support these regulations.