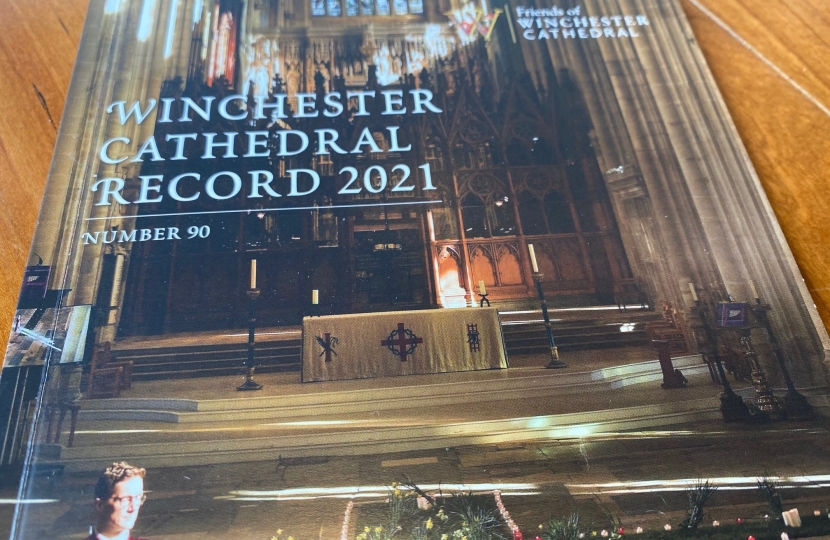 A still moment of calm - Winchester’s MP, Steve Brine, reflects on a busy life but one in which the Cathedral and Christianity has a special place.

My days in Westminster – which weren’t much altered during the pandemic – are full on and with two children (and a puppy) at home I can’t say they’re much calmer when I step off the train.

Very often I will be in town on my constituency Fridays – racing between appointments – and there’s one place I know a still moment of calm can always be found.

Indeed, I mentioned during a special ‘Visit Westminster’ zoom event earlier this year with the Friends how I will often sit inside our wonderful Cathedral, just to take a moment, and that seemed to strike a chord. Bruce Parker subsequently asked me to write something for the Record.

You see, I’m a Christian in Parliament. I wasn’t elected a Christian Conservative (in the US sense) but it’s who I am and, heaven knows, more than ever, we need authenticity in the House of Commons.

I am often asked whether my faith directs how I vote and, of course, it does not. But it’s a guide for sure and it’s reflected in the values that guide me.

I know nobody (including my wife!) votes for me as our MP because they agree with everything I do or every single position I take. It’s much more complicated than that in the same way, I dare say, you don’t always agree with every decision made by the Friends or the Cathedral – or even the Diocese.

Anyway, back to those values and recently I found myself cast as a “rebel” again after backing our policy whereby the U.K. spends 0.7% of gross national income on overseas aid.

It remains something I am incredibly proud of and, while I totally accept not everyone agrees with the concept of even having an aid budget, I have, as a government minister, seen first-hand the amazing work this country is able to support on behalf of some of the poorest people on earth.

The current argument is whether we should make savings from this budget, and drop from 0.7% to 0.5%, for a period while we recover from the worst effects of the pandemic. My judgment is we should not but, if we do, we have to set a clear date for its return.

Every other G7 country is maintaining its commitment and while the saving (some £4bn) is a lot of money, it means a lot more to the places it goes to help than it does to our relatively rich nation. As I always say to those who disagree with me on this subject; charity does begin at home; it just does not end there.

Thirteen years ago, before I was elected, Susie and I were blessed with our first child (Emily) and our second (William) came along in late 2010 just a few months after I became our MP.

Until that time we’d both been so consumed with our careers – finding success whatever that might be – but I’ll always remember what a neighbour said to us the morning after we became parents and the pink balloons appeared outside our house. He wasn’t a man we knew well but he popped his head over the garden gate and said whatever we DO in life, our children will always BE our greatest achievement.

Ours have grown up in public life (they think it’s normal I appear on the TV and Emily loves the fact I wear the bracelets she makes me while sitting in shot on the Commons green benches) but they know none of it really matters and a cuddle in Mum and Dad’s bed when a bad dream strikes is worth a thousand (or even 17,000) votes.

Some years ago – not long after I was elected in-fact – when I was out with my beloved Popcorn (my first dog) I bumped into a walker on the Clarendon Way en route to Salisbury.

He asked me for help with his map and we looked at it together. Map reading has never been one of my strongest disciplines (nor his) so I don’t think our session helped but he set off seemingly happy with the chat telling me it didn’t much matter how he got there, the important thing was to enjoy the journey.

That pilgrim was right and his advice after our map reading incompetence has stayed with me.

I know my opponents seek my downfall. I also know they don’t know me; that I am a symbol which, for some, is all good and for others all bad.

The trick is to find those values, our own Clarendon Way if you like, and look up – to enjoy the view – because nothing about this life is a rehearsal.

This piece was written specially for Winchester Cathedral Record magazine in the Sumer of 2021. You can read it in the magazine here.