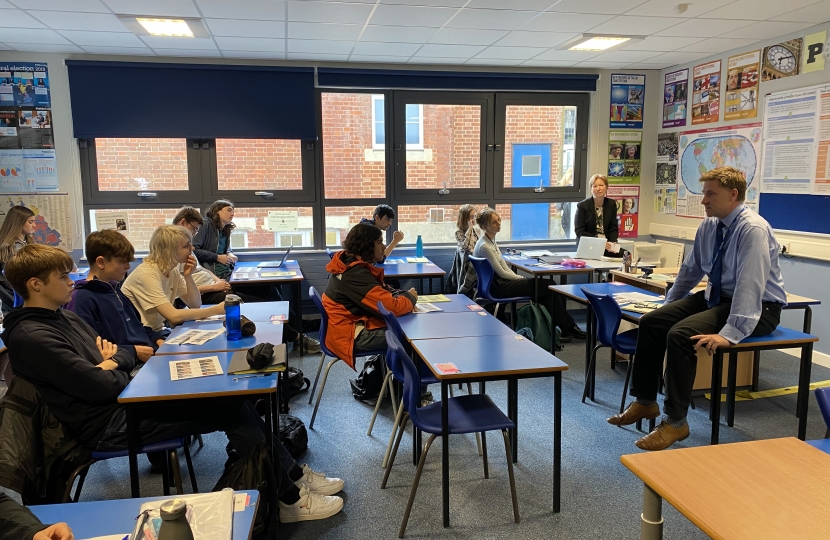 MP Steve Brine was given the opportunity to teach a politics class at Peter Symonds College today.

Steve was joined by politics teacher, Jo Thomas, as he took lower sixth students through subjects including the voting system used at UK general elections, the link between MP and constituency as well as the different roles and MP can hold within Government and Parliament.

Mr Brine broke the ice with a short picture quiz to test students knowledge of current political figures and welcomed questions and debate throughout the lesson.

Speaking after the lesson, Steve said; “I can’t begin to say how much I enjoyed my stint as a teacher at Peter Symonds. I remember sitting in their position myself and hope the students got something useful from the session.

"Many thanks to Jo Thomas for letting me take her class; I just wish I could have got round the other classes. Reason to go back but, in the meantime, I wish all the students the very best with their studies and hope they will contact me at any stage if they wish to ask any questions or check anything with me about life in Parliament and as an MP.”

Lecturer Jo Thomas said; "It is always great for Politics students to hear first hand from people who are actually involved in politics. Steve's description of his constituency work and relationship with his constituents was particularly interesting for the students and they were also fascinated to hear about the different functions of an MP in Parliament - all themes which they need to know about as part of their A level Politics course. They were also able to ask Steve a range of questions."

One student in the class, Nicole Harris, added; "It was great to have Steve Brine teach our Politics class on Friday, and it was interesting to hear his opinion on different electoral systems, and also the importance of constituency links. It was very useful to hear about Steve’s career, particularly as I intend on going into politics after university. It was fantastic that our class were able to ask a range of questions."

You can have a go at the politics picture round as Steve used in the class - download it below and let us know how you get on! steve.brine.mp@parliament.uk

Pictured; Steve at work in the classroom at Peter Symonds College.

Download the picture round as used in class (see below)