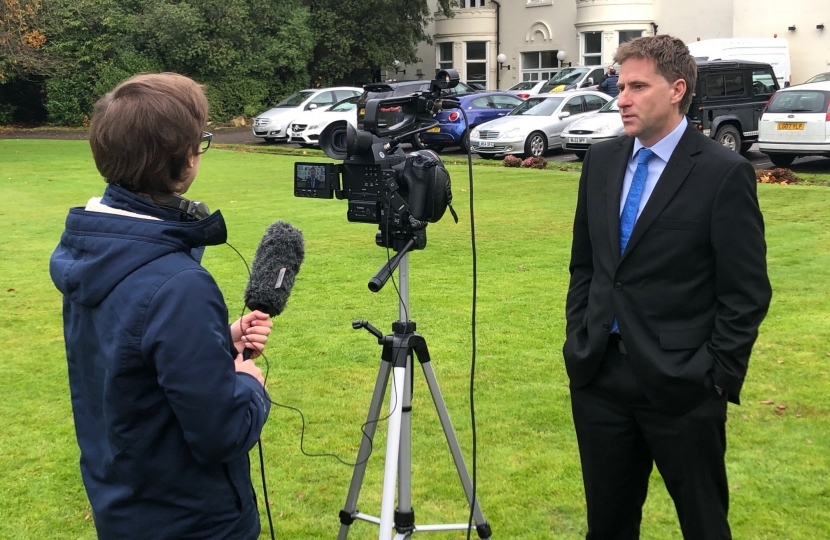 As you may know, I have served Winchester & Chandler’s Ford as our MP since 2010 and will be standing for the Conservatives once again on Thursday 12th December.

Politicians always say “this election is the most important” but this time we might be right. The outcome next month, in seats like this especially, will set the course of our country for many years.

Of course there are plenty of issues at stake, it is a General Election after all, but we face the first winter poll in a generation because of the stalemate in Westminster around Brexit.

I could not have been clearer and more consistent since 2016 but, for ease and to avoid any doubt, let me summarise where I stand;

I voted (and campaigned for) remain in 2016 but, as I said in the House of Commons recently, I have to recognise we weren’t successful and the country chose a different course.

As I have travelled across the constituency in this campaign, speaking to hundreds of people – whether they voted leave or remain – the clear message I get is, it’s time to move on.

My strongly held view is that we need to unblock Parliament and break the seemingly endless inertia in Westminster. We won't do that by constantly re-fighting the 2016 referendum, tearing our country apart in the process and stifling investment decisions up and down the land.

We can ratify the Withdrawal Agreement Treaty, safely with a deal, and if I am returned as part of a majority Conservative Government we will.

We can then focus on the future trading relationship - with our friends in the EU, yes, but also with the 150 or so other countries not members of that bloc - and all the other issues that matter.

You will note I mention the importance of leaving with a deal and will know that was always a red line for me. My insistence on that has, as widely reported, led me into a little conflict with my own party in recent months but it was the right thing to do. That is all in the past now because we have a deal and the Government/EU deserve credit in my opinion for agreeing a workable compromise which almost everyone said was impossible.

Of course, I appreciate it is easy for my opponents to take one side in this campaign and stir endlessly to further their partisan interest but, as our Member of Parliament, I had to be better than that. I also strongly believe that, as a society, we need to re-learn the art of listening to understand instead of just hearing to respond and irresponsibly carving our country deeper into leave or remain factions will never achieve that.

I had to at least try and represent everyone and my judgement remains that is best done by respecting the national result from 2016 but to do so with a deal.  And it was no good me protesting “no deal” unless I, unlike so many other MPs, was prepared to vote for one.

I voted for Theresa May’s deal; from the front-bench, from the back-bench and, as I promised the Prime Minister, I voted for his new deal at 2nd Reading last month so we can finally move forward.

It is a compromise for sure but it’s a good new deal; meaning we can leave the political structures of the EU without disruption and build a new relationship based on free trade and friendly cooperation.

Why am I telling you all this?  Well, I have spent this election saying, ultimately, it’s about the kind of MP who represents us.  I have done the job for almost a decade which gives me the strength, credibility and experience to ensure our voice is heard.

The next Parliament, if I am re-elected, will pass the Withdrawal Agreement as I say but the real action is still to come and I want to bring my experience to bear as we frame that future relationship. I think it is very much in the interests of Winchester & Chandler’s Ford to have a trusted and principled MP in the House of Commons at the centre of that with the ear of Government. The alternative is a quiet voice sat on the outside with no influence whatsoever.

I reject the extremes on offer at this election. I’m standing as a sensible, one-nation Conservative in the centre-ground of British politics; values I know we share in this constituency.

On Brexit, one of the defining issues of our time, I take a moderate position and I feel confident it is a position shared locally. If you think I have been a good local MP and you trust me to be our representative for the next five years, support me at this election.

Good and effective constituency MPs aren’t a given; don’t wake up on December 13th having lost yours, got Brexit and gained Jeremy Corbyn.

Winchester is not a safe seat; every vote counts. There’s a great deal at stake and what happens here, no matter how well meant, will play a big part in how it ends so I hope to have your support.

If you want more, you may wish to watch my recent speech in the House in a Queen’s Speech debate titled Britain’s place in the world at; www.stevebrine.com/stevespeaks