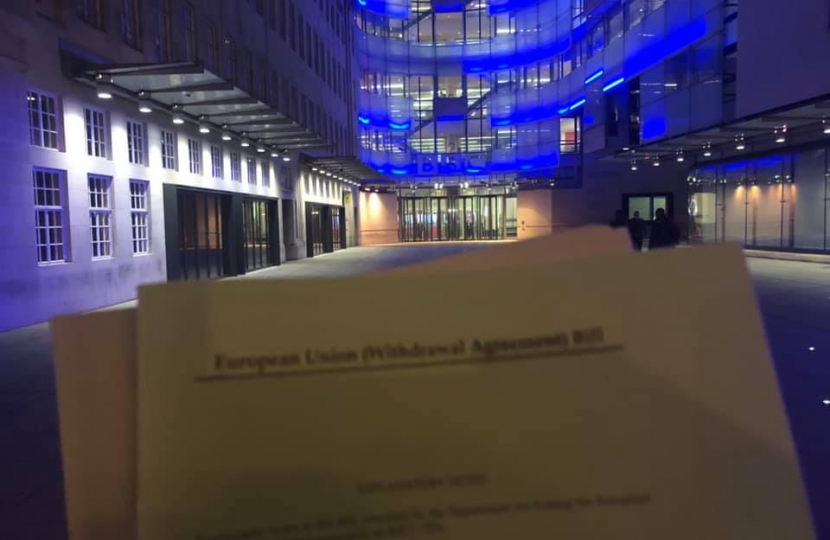 As the EU Withdrawal Agreement Bill passes it's key Second Reading stage in the House of Commons, here is a short vote 'explainer' from local MP Steve Brine.

He says; "After careful consideration over Monday night (it was a very late night and early morning reading the thing and its’ explanatory notes) I voted for the 2nd Reading of the Bill to approve it IN PRINCIPLE, and for progress of the Bill, either as set out by the Government, or if amended by agreement between the House and the Government.

"My reasons are this; I accepted the result of the Referendum, the process of which I had approved in Parliament. I told my constituents during the campaign that I would do so, and that I as a Parliamentarian had to take the responsibility for the way forward as there was no blueprint for how we were to leave. I then stood and was elected – with over 50% of the vote in our constituency - on a manifesto to implement the decision.

"My bottom-line sticking point was to avoid a no deal as a result of a failure of the withdrawal negotiations between the UK and EU. I had the party whip suspended, and possibly sacrificed my future career in Parliament by ensuring that, and a deal was arrived at last week, partly due to the pressure I and a number of colleagues exerted.

"This is the second such deal. There will not be another, and as you will now be aware, seeing that the Programme Motion was voted down there will be a delay and perhaps a General Election. More dither.

"My political life and career have been bound up with the EU in some regards, and I regret the decision to leave as I have said many times. I spoke in the House of Commons last week, in a debate about Britain’s Place in the World, of my feelings in this respect and constituents may find that of interest. You can see the story here and find the full ‘watch again’ link (it was a 7-minute speech).

"As I said in that speech, there are now two very distinct and EXTREME positions on Brexit; leave on WTO terms with no-deal from the Brexit Party and revoke as if it never happened without even recourse back to the British people from the Liberal Party. It may not fit on a t-shirt or a sticker but I am staying in the centre-ground and arguing for a deal that protects jobs, the economy, our security and citizens rights among many other things.

"Please remember also, still to come from whatever happens next, this is merely the Withdrawal Agreement (the ‘divorce) and the real action is in the Future Relationship which Parliament will have a big say over thanks to provisions set out in Clause 31 of the Bill. I want to remain in the House to ensure that sensible, moderate one-nation MPs like me are part of that in the future.

"If we do not agree, then I am sorry, but whether you do or not I hope you can appreciate how your MP has dealt with the issue over a lengthy period and tried to respond honestly and openly to constituents."

Steve spoke in the Second Reading debate which you can 'watch again' here.

Steve's Brexit pages remain online at www.stevebrine.com/brexit with more than three years of links and information but you can ‘like’ my page on Facebook for more instant updates; www.fb.com/SteveBrineMP