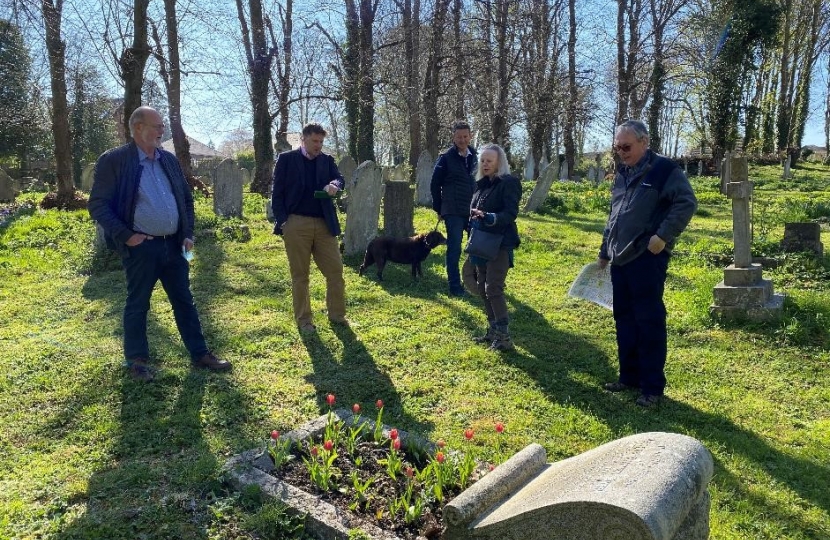 Steve was taken through some of the most iconic graves, including a former Mayor of Winchester, someone who died on the Titanic and the oldest (known) grave, dating back to 1694.

The St Giles Hill Graveyard is disused for new burials, the last having taken place in the early 70’s. The graveyard forms part of the estate and parish of St Johns Church within the jurisdiction of the combined parishes of All Saints, St Johns and Chilcomb. In addition to the medieval St Giles Chapel that occupies the site, two other churches feature in the history of the graveyard; St Peters Chesil and St John the Baptist in the soke. St Peters was converted to the Chesil theatre in the 1960s.

Steve said; “I loved the visit and was blown away by this special place right in the heart of the city. St Giles Hill Graveyard is a haven of tranquillity, wildlife and history. The team looking after it, led by Anna and David Stewart are true local heroes.

“They show the upmost respect for the history of the site and the individuals buried there keeping the graveyard in a rustic and mysterious state whilst ensuring the safety of its lost secrets.”

Anna Stewart added; “The Friends of St Giles Hill Graveyard were delighted with the enthusiasm and support shown by Steve on his visit to this ancient, previously neglected, hidden gem that is steeped in local history and a biodiverse selection of wildlife”

The Friends of St Giles Hill Graveyard are looking for volunteers and you can find out how to get involved at www.stgileshill.org.uk