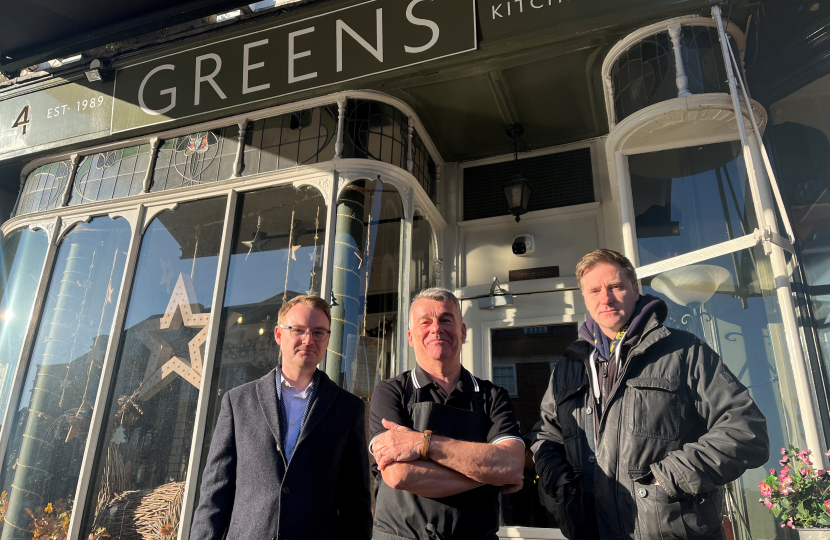 MP Steve Brine has has spoken out on behalf of local businesses frustrated as a new wave of power outages affect their trade. Recently, businesses in Southgate Street and Jewry Street have been affected by the problems, with one losing a whole day of trading.

Business owners have contacted the MP about how this is a regular occurrence at this time of year, with one saying they will stop paying rates if it isn't rectified.

Peter Neave, from Greens Bar & Kitchen in Jewry Street, said: “We lost all the power on December 14, so we couldn't trade until 12pm. We were considering having to cancel bookings after being told by SSEN we wouldn't have power until 3.30pm.

“There's nobody at SSEN to give any reassurance that it will be fixed. I've had Greens for 35 years now. They tried to blame it on the Christmas lights, but that has its own generators. I got so cross with it, so when it happened again on December 15, I actually put candles in my kitchen so my chefs could work. We needed to keep the doors open because of the last three years.

“The BID have been absolutely outstanding, they gave me the reassurance that they are on the case. We've managed to survive with everything that has been thrown at us over the last few years, but this one just about broke me.”

Mr Brine said: “Businesses impacted by these new power outages are fuming and so am I. We worked hard to get a major upgrade, with all the disruption that caused, to avoid this happening.

“Everyone understands accidents happen and unforeseen events can interrupt the power supply but we’ve seen a pattern of power cuts affecting businesses in this specific part of the city centre so there’s clearly an issue.

“SSEN need to move very fast to restore confidence as well as keeping the power on because, on top of these indulgent rail strikes, they can ill afford to lose business at this crucial time of year after the last two Covid affected Christmases.”

Mr Spencer said: “The electricity network upgrade in this part of the city centre, the final phase of which was completed last year, caused a lot of disruption but the investment was welcomed because it was intended to improve the resilience and longevity of the network. Therefore we are extremely disappointed that businesses in these particular streets are being affected by outages again and during such an important time of the year for trade.

“We have been in contact with many of the affected businesses and are liaising with SSEN to ensure these recent faults are resolved quickly.”