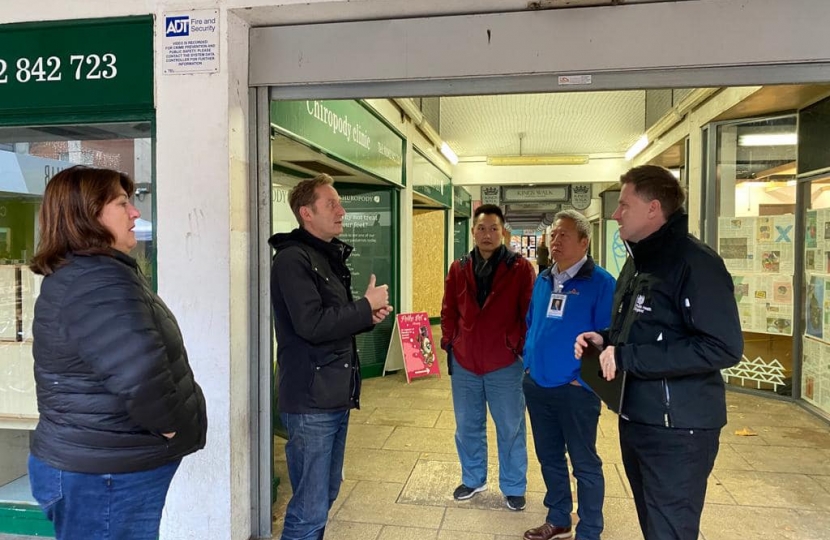 Winchester’s MP met with tenants at Kings Walk (Friday) to talk about the future of the site and ongoing, unresolved anti-social behaviour problems.

As reported last week, Winchester City Council have told a number of businesses in the area they must leave to make way for a new ‘arts and creative’ hub.

The Chinese Supermarket and Sunflower Emporium are among those who’ve been told to they must be out on Christmas Eve.

Steve said; “It’s hard to argue with the idea of a creative zone in the city centre but it’s incredibly vague to effectively shut what are viable businesses who cannot afford to move to other locations in what is one of the most expensive High Streets in the country.

“At the end of the day these are clients of the City Council and I think a compromise will have to be reached. We should be supporting unique independent businesses at this time, not closing them down.”

Speaking about the public order issues facing this part of Winchester, Mr Brine said it was a situation no-one could ignore any longer.

“Heavy drinking around what used to be the city centre fountain, and all the anti-social problems that flow from that, has reached a tipping point.

“Businesses tell me it’s seriously impacting their livelihoods and they don’t feel safe. Winchester cannot carry on like this which is creating the very opposite of a cultural hub and creating a terrible first impression of our city as it tries to recover from the pandemic and have a successful Christmas.

“It’s no use saying a ‘multi agency team’ is looking at the issues in this part of town because that invariably means everyone is talking and nobody is taking responsibility.

“I am going to be speaking with WCC, the BiD team as well as our Chief Inspector and imposing myself on the situation. Someone needs to grip this as should have happened years back.”

A new “tactical” meeting, chaired by the police, is due to meet early next month.

The MP added that he has also written to Winchester City Council about the mobile butchers van which can often be seen parked outside Kings Walk.