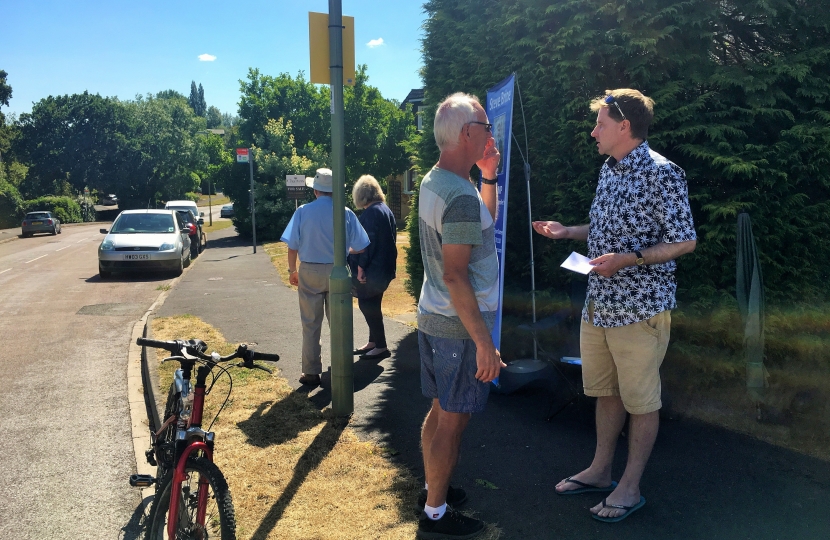 Cllr Lucille Thompson is expected to form a new Liberal Democrat administration at the council next week and the MP says he is keen to get early clarification about their approach to Eastleigh Borough Council's controversial Local Plan process.

Mr Brine says; "The Liberal Democrat run council next door has been without a Local Plan for the best part of ten years and the whole process is widely seen as having been a total debacle. Now though, after warnings from the Secretary of State to get on with it, EBC has consulted on a proposed new Plan which has caused a great deal of anxiety and anger across the border in my constituency."

Communities including Colden Common, Brambridge, Hursley, Twyford, Otterbourne and Compton are worried about options in the Plan which could see thousands of new houses built on the border with Winchester. Concerns range from the impact on the environment and biodiversity to air quality and the extra traffic such large-scale development would have on the area.

A huge campaign has swung into action to ensure residents in Eastleigh and the wider area, including in the Winchester District, are able to have their say on plans which would impact greatly on life locally. This has been led by Against Destructive Development (ADD) which the Winchester MP has supported since its inception along with the Eastleigh and Meon Valley MPs.

Steve adds; "I wanted to write straight away to the new leader of Winchester on the subject of Eastleigh's Local Plan because there are grave concerns among many people about its impact on the communities I represent. They rightly want to know whether the now Lib Dem led Winchester will stand up to Lib Dem Easteigh on behalf of our District or change the position held by the previous Council leader, Cllr Caroline Horrill.

"I am very aware of statements made by local councillors in a personal capacity when standing for election but my constituents will ultimately judge the actions of the administration they support at Winchester City Council."

Writing to Cllr Thompson, the Steve Brine says; "Eastleigh’s Local Plan has been a torturous process to-date. Unlike Winchester, where you inherit a signed off Plan (now undergoing its revision in line with statute), Eastleigh has no updated Local Plan.

"Winchester’s response, rightly, recognised its obligation to engage constructively in the Local Plan process and made it clear the City Council’s wish to take part at the oral examination.

"As the incoming leader of Winchester, and a party colleague of the leader in Eastleigh, I am therefore seeking to understand your position on their Local Plan and whether there is any deviation from the existing stance as expressed in the Local Plan submission of 3 August 2018.

Furthermore, I seek confirmation that Winchester will speak against the Plan at the oral examination when that takes place."

Steve Brine's letter to Cllr Thompson, and associated correspondence, is available to download below. Any reply will be posted to this website and shared with the local press as well as local councillors.

Pictured; Steve Brine held a street surgery in Colden Common as part of his 2018 Summer Tour. The issue of Eastleigh's Local Plan was a frequently raised subject.