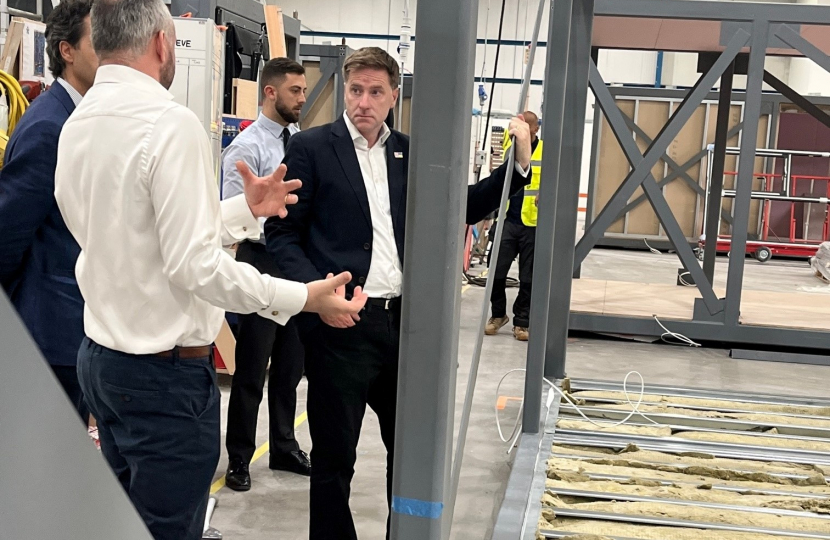 Bosses at a Winchester construction company spoke of their 'immense pride' after waving off two emergency shelter units to the Polish-Ukrainian border, but insisted - 'this is just the beginning'.

Stelling Properties, which specialises in modular construction, has used its expertise to design and build transportable accommodation inside shipping containers to help house those living in dangerous and freezing conditions in refugee camps across Europe.

The insulated units - which can be configured within an hour of delivery - include flexible sleeping, living, kitchen and bathroom spaces which could potentially provide shelter for up to two adults and two children or three adults at a time.

Dubbed project Re:Haus, the endeavour runs as a separate staff-led charitable initiative and was started by the team just days after news of the war in Ukraine broke as a way in which they could put their expertise to good use.

On Friday morning, employees and trustees waved off the first two units from their Micheldever Station base as they departed on the back of a lorry for a refugee camp in Poland.

Steve Brine MP helped connect project leaders at Re:Haus with Chris Roles of the Disaster Emergency Committee. They are currently exploring ways in which the organisation can help support Stelling to produce hundreds more units. Mr Brine was given a tour of the factory where the temporary homes were built and watched on as they left for Europe.

He said: "It is such a simple idea, if it hadn't been invented it would of had to have been created, and the great thing is it has been created right here in Winchester and it is actually changing people's lives across the world. There is a much bigger read across than just the Polish-Ukrainian border, there are maybe just short of 100m displaced people around the world today, so, you can see this has real application and I'm going to be taking the ideas that I've seen here today back to Westminster and telling everybody and everybody who will listen.

"People feel very powerless in respect of the Russia-Ukraine conflict, and this is something very practical that people could get involved in through different charities and aid efforts, including the DEC, to see rolled out wider and wider. This is a brilliant home-grown idea that is changing lives."

The first prototype unit was built in just two weeks at the end of March, with staff leaning on their experience to 'design on the go'. Learning from that process, the first two fully functional homes were put together in the same space of time.

Dean Porrett, a cell leader at Stelling Properties, said: "I've really enjoyed being part of the project. I was a bit doubtful at first when we brought the shipping container but as it all came together I thought, 'I'd actually happily live in this myself'. We're all very proud, it's good to see we're helping people out there. They need that help, and hopefully we can help many more families as this project progresses."

The first two units were funded by Stelling to showcase the potential the pods have to change people's lives. But despite the celebrations on Friday, project leaders are calling for further support to kick on and ensure Re:Haus helps as many refugees as possible.

Sam Whitworth, engineering director at Stelling Properties, said: "Seeing the units leave for Poland gives me immense pride, predominantly for the team who have delivered them. A lot of people have given up their evenings and weekends to really go the extra mile and show they care - I couldn't be more proud of them. To see it from my position has been a real privilege. I just really hope we can get it to a point where all their hard work comes to fruition and we can deploy more of these units and help a lot more people.

"We set up with the ambition of creating accommodation that was safe, secure and dignified, and I think we have all worked hard and believe we accomplished that. I can see people living in there, being warm, being able to lock the front door, cook meals, wash and keep themselves clean. I really feel we have got a product that delivers those things and has the potential to make an enormous difference to an awful lot of people.

"Our key focus in any activity is the customer and for us, the customer is the person who lives in or uses the units we provide. It's the aid worker who lives in it, the doctor who uses it to treat people who are sick or the refugee who is seeking accommodation. So forming partnerships with the aid agencies and foundations really helps us to get closer to the customer and what they need - and ultimately that is what it is all about.

"What we need now is financial support. The majority of people who are coming to us for help are aid agencies or foundations who want the units but need help sorting the funding. So, what we're trying to do for them is give them a turnkey solution where we find that funding and deliver them the units and lift that burden away from them. So we're really seeking supply partners, businesses, aid agencies and individuals who are willing to get involved, to donate and supply materials to help us take this from what has been a fantastic success today getting the first two units sent off to Poland into something much, much bigger where we can supply hundreds of units and help thousands of people."

To find out more about the project, or to donate, visit: rehaus.org/