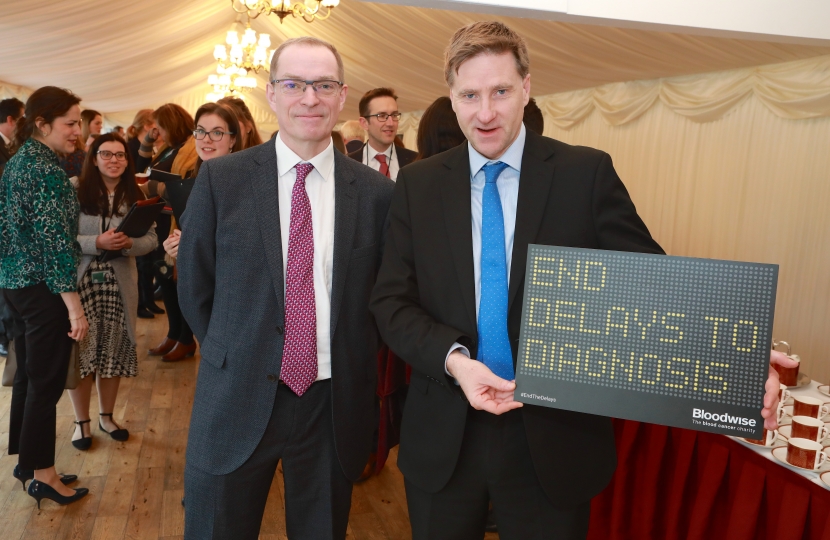 Steve Brine MP attended an event in Parliament this week as part of his commitment to help reduce diagnosis delays for people with blood cancer. He heard from nurses, doctors and patients on Tuesday 25 February at the reception organised by the blood cancer charity Bloodwise at the House of Lords.

NHS figures show people with blood cancer are more likely to visit their GP multiple times before being diagnosed than for any other cancer. Blood cancer patients who are diagnosed late are at greater risk of dying sooner and may have fewer treatment options. Delays to treatment can also result in kidney failure, broken bones and paralysis in some types of blood cancer.

A public petition launched by Bloodwise calling for the Government to ‘End the Delays’ has now reached over 10,000 signatures. The charity also launched a report into the issue last year.

Sarah McCartney, whose sister, Laura, died from blood cancer at the age of 30 last year, spoke at the event. Laura had visited her GP with symptoms for over a year before her diagnosis with late stage Hodgkin lymphoma.

Bloodwise, which is changing its name to Blood Cancer UK, is calling for the new Government to commit to improving diagnosis of blood cancer by giving GPs the support they need to identify symptoms that could be red flags, which can include unexplained bruising, bleeding, night sweats, fatigue and weight loss. A recent survey by the charity found that three quarters of GPs wanted more training or time with patients to help them diagnose blood cancer symptoms more effectively.

Steve Brine, who is a former Cancer Minister, said: “It was very moving to hear from people with blood cancer and their family members about their experience of diagnosis delays. Many delays can be avoided and its vital that blood cancer is included in the plans we put in place to diagnose cancer earlier.”

Phil Reynolds, Policy Manager at Bloodwise, said: “It’s fantastic to have Steve Brine’s support for the campaign. There is a clear need for more support to help GPs identify possible cases, know how to interpret often-complex test results and ensure patients with unexplained symptoms do not slip through the net.”

People can sign the ‘End the Delays’ petition at bloodwise.eaction.org.uk/endthedelays. Information about blood cancer symptoms is available at Bloodwise.org.uk and via its free helpline on 0808 2080 888.