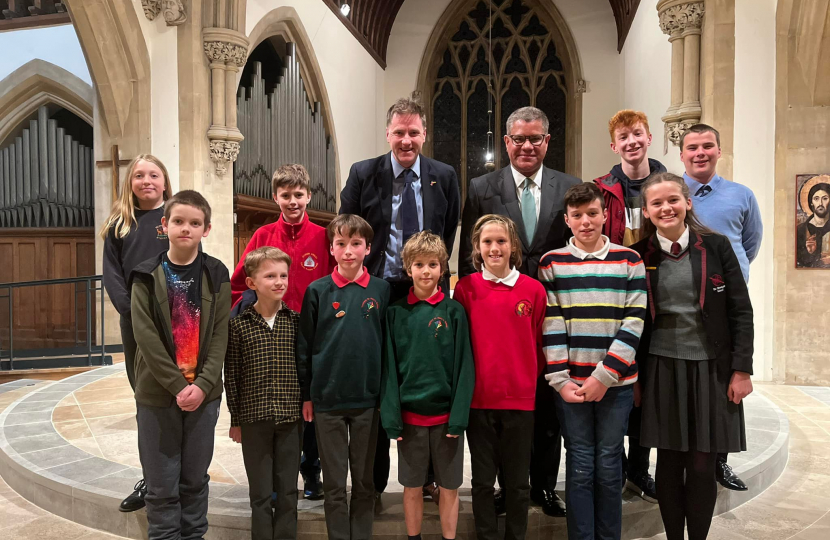 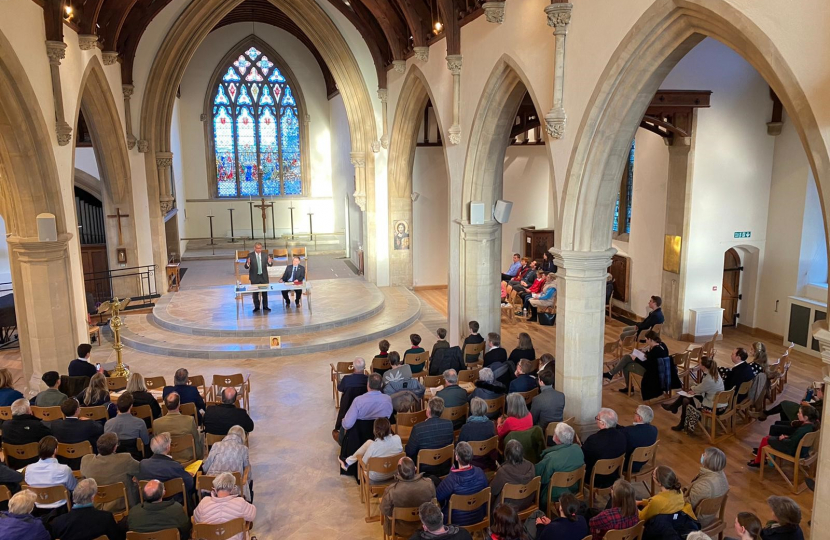 COP President, Alok Sharma MP, spoke with over 120 people at the event held in St Paul’s Church in central Winchester about the landmark conference held last year in Glasgow and the ongoing work to turn commitments into climate action.

The focus of the event, which was the first of its’ kind to be held physically since before the pandemic, was the future as the UK’s presidency continues through 2022 and attendees heard an impassioned speech from the Reading MP before a lengthy question and answer session, chaired by Steve Brine.

As well as constituents and representatives of various local groups, a number of school children from across Winchester & Chandler’s Ford attended and asked questions.

Speaking after the session, Mr Brine said; “I’ve been looking forward to getting Alok in front of constituents because he’s so passionate and knowledgeable on this most important of subjects. He has such a central role at the heart of our Government but also internationally so we were extremely fortunate to get him here in person to engage with residents.

“We may have different priorities, and even differences of opinion on how to get there, but we all care about the climate and achieving a sensible, planned, transition to net zero which is central to our mission as a Government.

“The school children, including my own, attending really stole the show and certainly laid down the gauntlet to Alok while providing a positive energy and some real hope for the future.”

Alok Sharma MP added; “It was an absolutely brilliant meeting with lots of really positive questions, very searching questions at times, particularly from the young people. I think with them in charge we’re going to have a great future ahead.”

The Deputy Leader of Hampshire County Council, Cllr Rob Humby, attended along with the Cabinet Member for Climate Change at HCC, Cllr Jan Warwick. No members of Winchester City Council’s Cabinet registered to attend despite the authority declaring a climate emergency shortly after taking control in 2019.

The next event in Steve’s ASK series is ASKtheAIRPORT in May, which will give the opportunity for constituents to hear from Southampton International Airport. That will be held on the evening of May 19 and constituents should contact the MPs office to register or visit www.stevebrine.com/askseries

Pictured/watch; A short-film made at the event, Steve Brine MP with Alok Sharma MP and local school children plus an aerial shot of the event held at St Paul’s Church.

Since becoming our local MP, Steve Brine has organised a series of open meetings to debate some of the key local, national and international issues of the day.

His Ask series has become well known for tackling the big subjects and they have been well attended each time.