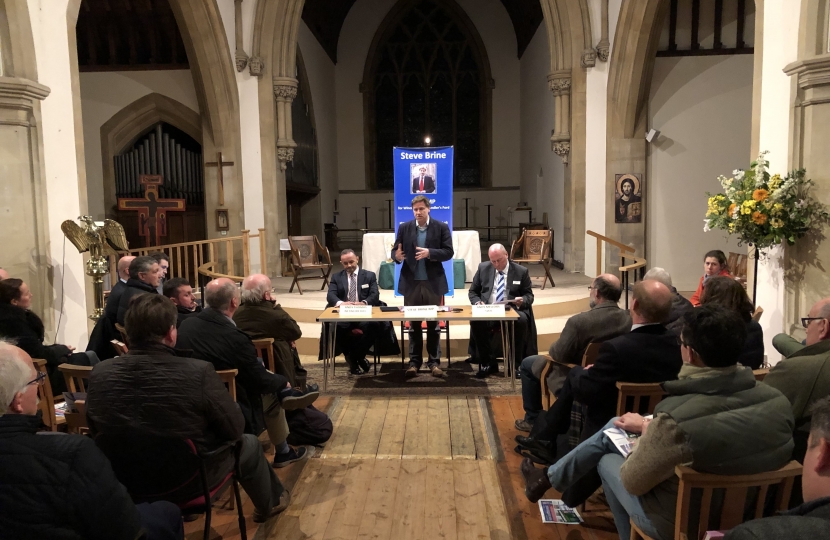 Since becoming our local MP, Steve Brine has organised a series of open meetings to debate some of the key local, national and international issues of the day.

His Ask series has become well known for tackling the big subjects and they have been well attended each time.

Will be posted to this page in due course but you can send an email to Steve with you name and full address to receive notification of any future events.

Event - ASKSWR
Date - January 2019
Subject - Local rail services
Steve brought the boss of South Western Railway and Network Rail to St Paul's Church in Winchester for an evening of questions and answers on issues from customer service, smart ticketing and industrial disruption to operating performance. This event is pictured. Read more about this event >

Event - ASKtheNHS returns
Date - January 2017
Subject - STP and acute services review
As the local NHS published its important Sustainability & Transformation Plan, ASKtheNHS returns was held on the evening of Thursday 12th January 2017 to discuss that and the future of acute hospital services. The meeting was held at Ashburton Court in Queen Elizabeth Court, Winchester. Read more about this event >

Event - ASKtheNHS
Date - March 2014
Subject - Local NHS proposals
Trust Chief Executive, Mary Edwards, was joined by senior clinicians and the West Hampshire Clinical Commissioning Group to discuss possible plans for major service change across the Winchester, Chandler's Ford and Basingstoke area. Around 150 people attended the event, which was held at the United Church on Jewry Street in Winchester. Read more about this event and watch a short-film >

Event - ASKSWT
Date - November 2013
Subject - Local train services
Steve brought South West Trains Managing Director, Tim Shoveller, and several members of his senior team to Winchester to outline his plans for the railway locally and answer questions from train users. Future capacity, seating, broadband, on-train toilets and safety at Winchester Station were all on the agenda for a meeting which was held at St Pauls' Church in Fulflood. Read more about this event >

Event - ASKtheMINISTER
Date - November 2012
Subject - UK Aid policy
Outgoing Minister from the Department for International Development, Stephen O'Brien MP, came to the city to debate UK Aid policy and to take questions from constituents. He was able to explain why the UK wishes meet the UN Millenium Development Goal of Britain spending 0.7% of our gross national income on overseas aid by 2015 and where it is being spent in some of the poorest nations on earth.  Steve Brine invited everyone who has ever written to him in support of the policy - and everyone who opposes it - to the meeting which saw passionate views on both sides. Read more about this event and watch a short-film >

If you have an idea for a future Ask the ... series event, Steve wants to hear from you.  Please email us giving full details of your idea along with your name and address; steve.brine.mp@parliament.uk