MP given award for work on golf and health 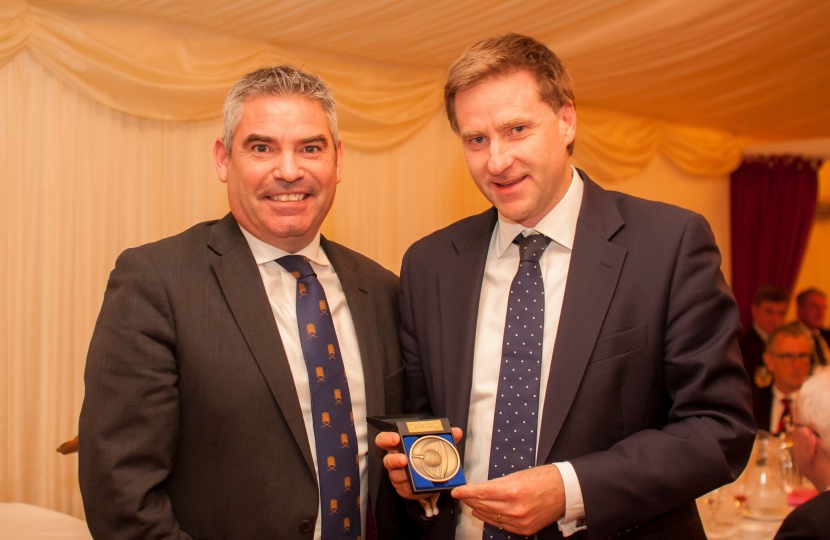 On Monday 26th November, the All-Party Parliamentary Group for Golf held its annual charity dinner in the House of Lords.

The dinner, hosted by Group Vice-Chair Baroness Nye of Lambeth, brought together Members of both Houses of Parliament, honorary and associate members, Group supporters and dinner sponsors, The R&A and The PGA.

Speaking at the dinner, All-Party Parliamentary Golf Group Co-Chair and Member of Parliament for North East Fife, Stephen Gethins MP, said “2018 has been another exciting year for golf and for the Group in Parliament, and our annual charity dinner provides an opportunity to reflect on the past year.

“The Group continues to support golf at all levels, raising issues and speaking up for the sport in Parliament and outside at every opportunity.

“Thank you to colleagues in the House of Commons and Members of the House of Lords who have supported the Group this year, and particularly to Group supporters The R&A, The PGA and PING, without whose support the Group could not be active at the level it is.”

Group Co-Chair and Member of Parliament for North Warwickshire, Craig Tracey MP, added “the Group’s dinner provides a fitting celebration of the past year in golf, and an opportunity to recognise the contributions that are made at all levels of the sport.

“Looking forward to 2019, the Group will continue to provide a strong voice for golf in Parliament, and will look to build upon work done this year in areas including the health benefits of the sport, golf and the environment, and women’s involvement in the game.

“I look forward to continuing to work with all involved with the Group to support golf.”

Throughout the evening, the Group presented its annual awards. The recipient of the Group’s Longstanding Service Award was Royal Portrush Golf Club Secretary, Wilma Erskine, for her outstanding service over 30 years, including an instrumental role in bringing the Irish Open to the club, and laying the foundation for the return of The Open in 2019.

The Parliamentary Golfer of the Year Award was presented to Steve Brine MP, in recognition of his work to champion the health benefits of golf in government as Public Health Minister, including a key role in the First International Conference on Golf and Health earlier in the year at the QEII Centre.

The Group announced three new Honorary Life Members: John Yapp, in recognition of longstanding service to The PGA, and as a member of the Ryder Cup Europe management board; Diane Bailey MBE, President of the Ladies Golf Union since 2015 who led the merger with The R&A, and also played in and captained the GB&I Curtis Cup team; and Andrew Morgan, for service to golf through a range of roles including at the Welsh Golf Union, European Golf Association and International Golf Federation.

By the end of the evening, the Group was able to announce a charity donation of £5505 for the Golf Foundation.